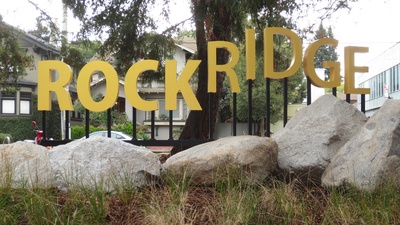 Rockridge is a residential and commercial neighborhood of North Oakland, also known as Lower Rockridge per the map above. The first homes were built in the 1880s (a few still remain), with most of the housing built after 1906 through the 1920s. It spans from 51st Street to Claremont Avenue to Alcatraz, the Berkeley Boarder, and back to Broadway.

Rockridge includes a large residential area with single-family homes and multi-family buildings, as well as the College Avenue commercial district, which runs from Broadway to Alcatraz, and the Rockridge BART station (pictured above) 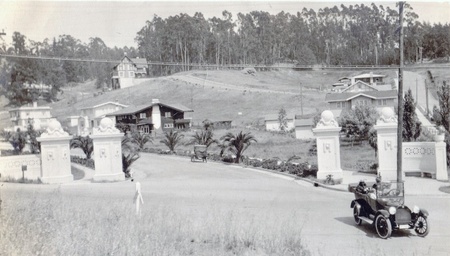 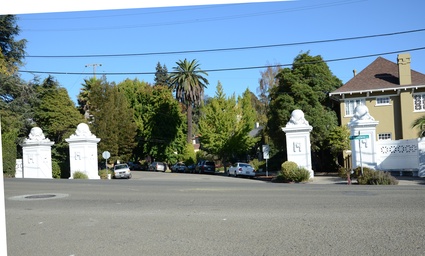 Broadway at Lawton (2013) photo CC-A from Our Oakland

These gates were built in 1910 at the entrance to the Rock Ridge tracts (Broadway and Lawton) by Walter Reed. His brother, Fred Reed was the subdivision manager for the company responsible for opening up Rockridge.3

Rockridge began being developed in the early 1900s when the Horatio Livermore family began selling off the land they owned. The first chunk went to the current Claremont Country Club. A banker named Philip E Bowles bought land between Acacia and the Country Club and the rest went to "Rock Ridge Properties." The property was opened up in 1906 by the Laymance Real Estate Company and divided into three subdivisions: Rockridge Place, Rockridge Park and Rockridge Terrace (some of this is now Claremont Pines). The higher the land, the higher the prices. 2 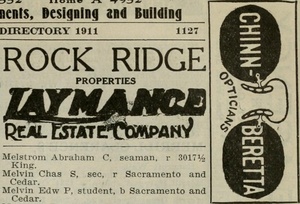 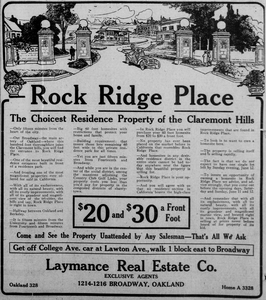 Rockridge is served by BART with a stop along the Pittsburg-Baypoint line.

The Firestorm Community Mural Project, located outside the Rockridge BART station, is comprised of more than 2,000 hand-painted tiles honoring those who fought and died in the 1991 Oakland Hills firestorm.

Frog Park is a popular children's playground created in 2001, fundraised for and led by a neighborhood group which consists of a greenbelt connecting Hardy and Redondo parks.

The Rockridge Branch Library is located at 5366 College Ave. It features a community meeting room with a capacity for 94 persons.

The city of Oakland sued Caltrans [year?], claiming an inadequate Environmental Impact Report with the construction of the fourth bore of the Highway 24 entrance to the Caldecott Tunnel. The City won an $8m settlement. A noise study in 2009 showed that 135 properties near Hwy 24 between Broadway and Telegraph meet state and local agency criteria for soundwall construction. Studies on impacts and possible locations will cost around $1m, the cost of which will be covered by the settlement funds. Info can be found at fourthbore.org