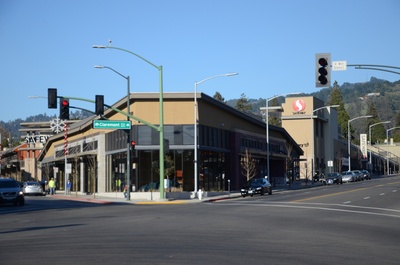 Safeway on College is a shiny new (completed in January, 2015) Safeway grocery store that replaced an aging, worn Safeway that was there previously.

The old store was behind a large, surprisingly lumpy parking lot; the new one has parking on the roof. Previously there was a 76 gas station on the narrow corner; now there's a separate building with street- and courtyard-facing retail space. One of the first tenants looks to be a Philz Coffee, despite the fact Cole Coffee is across the street, there's a Peet's Coffee in the next block one way, and Spasso Coffee in the next block the other. And it being a Safeway, it has a Starbucks Coffee inside.

There was controversy about developing the new store, so it ended up taking 8 years to complete the project.