Called Frog Park, because of the community organization which built the park, FROG, Friends of the Rockridge-Temescal Greenbelt. A group of neighborhood parents began to effort to find space for a children's park in Rockridge. After 3 years of search and some opposition to the park, a master plan was developed to create a new park, anchored by two custom-built play structures and organized along the spine of Temescal Creek. The play structures were designed by Leathers & Associates after community meetings where children and adults contributed ideas for what they'd like in a park.  The one-of-a-kind play structures  were built during the "Big Build" in October 2001, by 1,300 volunteers who worked over 10 days to build Big Frog (at what was Hardy Park) and Little Frog (at what was Redondo Park). This phase also included a lovely path from Hardy Court to Clifton, and from Cavour to Redondo. 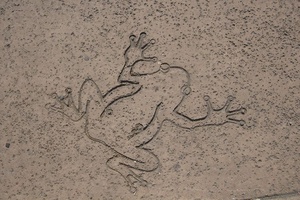 The Dog Park under the freeway had been in place since 1995, and was built because of the advocacy of the Rockridge Community Planning Council, as the first dog park in Oakland. This was done as part of the settlement with CalTrans, when they used the area to stage equipment and materials for the seismic retrofit of the freeway support columns. Dogs are not allowed off leash in the park except inside the dog park. 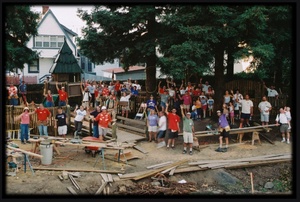 In 2003, FROG worked on completely restoring the historic "Oceanus" mural on Claremont Avenue, the first CalTrans mural in the state in the early 1970s. Then in 2006, the next phase of the park was developed, including swings, a water fountain, upgraded basketball courts, and the completion of the path between Clifton and Cavour. In 2011, a solar-powered bathroom was opened. In 2013, a project was launched to complete enhancement to the park with additional swings and more disabled-accessible play equipment. This work is expected to be done in 2014-2015.

Every Earth Day and September, FROG collaborates with a number of community organizations, schools, scouts, firefighters, and neighbors to clean and maintain the park. The www.frogpark.org website gives details on this and other projects at the park. Volunteers are welcome, and families are encouraged to join in the stewardship of the park. 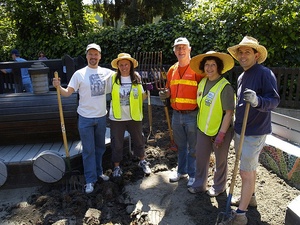 Frog Park is the site for many birthday parties and gatherings of play groups, daycare groups, and pre-schools. The picnic tables are not reservable, so the area is first-come, first-serve. City park ordinances do not allow amplified music or sound at the park without a permit from the Office of Parks and Recreation.