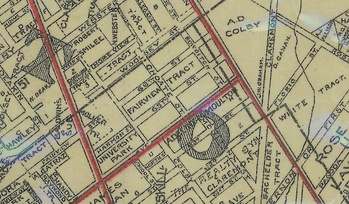 This neighborhood is also considered part of Rockridge or Lower Rockridge, especially the portion south of Alcatraz Avenue. The Fairview Park name arose when the Berkeley Development Company filed a tract map in 1904 covering the area bounded by Dana Street, Alcatraz Avenue, College Avenue, and as far north as the houses on the north side of Woolsey Street between Dana and College. 1 The company constructed stone pillars on the north side of Alcatraz at Benvenue Avenue, Hillegass Avenue, Regent Street and Colby Street marking the entrances to the neighborhood.  Oakland North posted a nice article about the effort to restore one of the pillars in September 2011. At the time, the land was in unincorporated Alameda County, but the majority of the area (all but the houses on both sides of Woolsey Street) were later incorporated into the City of Oakland, and this portion is now sometimes called the Fairview Park Historic District although it is not clear whether it has ever been officially designated as a historic district.

A 2019 Landmarks Preservation Advisory Board staff report regarding the designation of 6475 Colby Street as a Heritage Property contains a great deal of information about the development, including the following summary:

In early 1905, the newly-incorporated Mason-McDuffie real estate group of Berkeley took over the development and marketing of Fairview Park, just in time for the building boom following the 1906 earthquake. The quality of craftsmanship in Fairview Park homes is noteworthy, especially given the rapidity with which the neighborhood developed between 1907 and 1915. Roughly half of homes in Fairview Park typify the brown shingle and Craftsman bungalow styles popular before 1910, while there are examples of the later Prairie and California bungalow as well. More than most modern neighborhoods, Fairview Park homes share a sense of time and place and style, with houses set slightly above wide front yards planted with flowers, and homes separated by narrow driveways. Stone pillars along Alcatraz Avenue mark the boundaries of the tract and establish its identity. In recent years, the neighborhood has repeatedly mobilized for the repair and maintenance of the pillars after vehicle damage, vandalism, and deterioration. 2

The Oakland Museum of California's online collection includes two old tract maps of the "Claremont Avenue Tract" south of the original Fairview Park, one that extends northward to Alcatraz (but does not properly show the jog where 62nd Street intersects with Hillegass Avenue), and a second that only extends up to what is now 63rd Street. 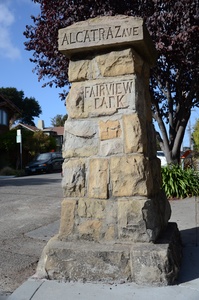 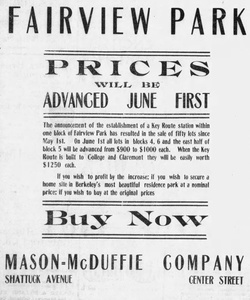