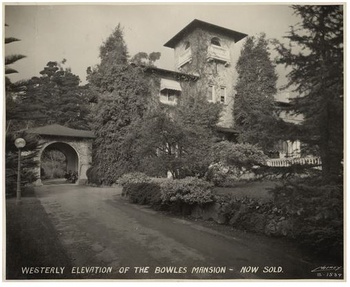 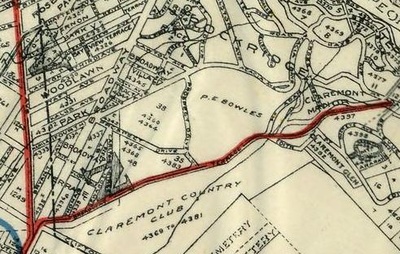 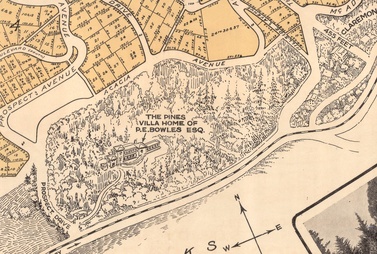 In 1909 Bowles purchased 51 acres of land in "Claremont hills adjoining the Livermore Rockridge Homestead." 1 He signed a contract for the erection of a residence to cost $31,000. The property he chose had a view of the Bay and all of the surrounding country. He engaged an expert landscaper who designed the grounds of the estate following Bowles' plans.

In 1911 the home was featured in January issue of Architecture & Engineer of California Magazine. It states the architect was L.B. Dutton. 2

In about 1927 or 1928, Andrew Williams of the Andrew Williams Store, a chain of local grocery stores, bought just the home then identified as No. 2 Bowling Drive. 5 There is some speculation that the street name was intended to honor the Bowles family, although contemporary articles merely note that the entire Claremont Pines development used old English-style street names.

After spending two years remodeling and adding new furniture, including expensive Persian rugs. Williams put the house up for sale in 1931. 8 The house was demolished in 1938. 9