Lower Rockridge is a neighborhood of Oakland that intersects with Rockridge. 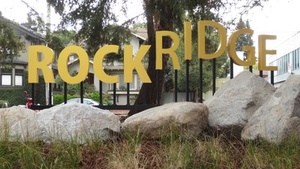 This is older part of Rockridge, filled with mostly 2 and 3 bedroom bungalows in the classic Arts & Crafts style.  Many have been beautifully renovated, and quite a few have been featured on the Rockridge Kitchen Tour, sponsored by the Rockridge Community Planning Council.

Much of this area was due to be demolished in the 1960s and replaced with high-rises, as the freeway and BART were built, property values sagged and people moved to the suburbs. In the 1970s, groups of neighbors came together to keep the "old fashioned" Arts & Crafts style homes, forming the Rockridge Community Planing Council (RCPC) and petitioning the city to stop the up-zoning of the area.  RCPC, which still exists as a community membership organization with an elected board of volunteers), also took a lead role in creating the special commercial zoning on College Avenue which supports small retail and owner-operated businesses.

The thriving College Avenue commercial area has since become a nationally-recognized pedestrian-oriented retail area, which is the subject of architectural and urban planning tours and articles. One of the main features is the Rockridge Market Hall, located across from the BART station and including a number of speciality food shops and cafes.