This page is a member of the Transportation Portal. 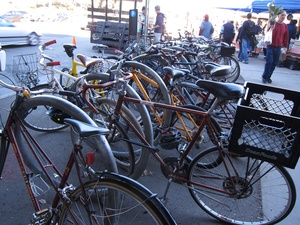 Bike Corral near Grand Lake Farmers’ MarketIn the 1970–80’s, trying to ride bicycles around Oakland was no fun. Pedestrians would yell at you to get off the sidewalk; car riders would honk and scream at you to get out of the street. Curb cuts did not exist (only driveways). In wanting to ride a bike, you were pretty much always on your own, and universally seen as some eccentric, vaguely unpatriotic freak (probably a hippie). Car culture was peaking, and bike riding by grown adults in the face of so much cheap gas, subsidies, etc. was regarded with suspicion (at best) and usually no small amount of hostility. [At least the homies at Hank & Frank understood – Ed.]

Something obviously changed in a big way since then, and I hope someone who was here during that change will edit this to explain what turned the tide, how, and when.

Flash forward to 2007, when the City approved a Bicycle Master Plan. As of 2012, Oakland is the 7th out of the US’ 100 largest cities in bicycle commuting, and bicycling in Oakland has increased over 250 percent since 2000. What should Oakland bikers know about biking in Oakland?

Would it be good to tie in some cohesive manner like sfwiki’s?

If you need to repair your bicycle in Oakland, these are the places that offer basic to advanced services to help you out!

Don’t Ride Your Bike on the Sidewalk.