"The Lakeview Dog Park [aka Astro Dog Park) has been in the works since 1998. Dogs are not currently allowed off-leash anywhere around Lake Merritt, and are banned from all of its green spaces. The notion of a dog play area near the lake was first integrated into the Lake Merritt Park Master Plan in 2002." [source] 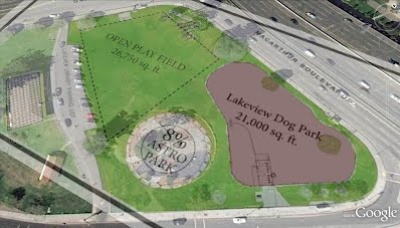 According to Save Astro Park "The fenced dog run would take away about half of the usable play field and force children and adults to share what little is left over." (SaveAstroPark.org)The dog park was proposed for Eastshore Park, next to Astro Circle, in the Grand Lake neighborhood. The key area of contention was whether this location, which is in a busy and highly-visible part of Oakland, was most appropriate for the park.

The fight reached something of a fever pitch in Dec. 2012 when the decision for the location came before City Council. The Council reached an impasse on the issue and Mayor Jean Quan "ordered alternative sites to be considered near Lake Merritt." [source]

In January the Office of Parks and Recreation recommended that the dog park be located at Snow Park in the Lakeside neighborhood west of Lake Merritt. It's possible that the selection of the new Snow Park location may finally end this decade-long battle.

Check out the Snow Park Dog Play Area entry for more information on the proposed site and ways to get involved to shape the future of the site. 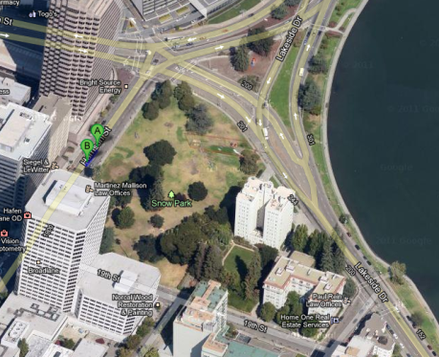 The city is proposing a portion of Snow Park at 19th and Harrison as a possible location for a new dog park (instead of Lakeview/Astro). The dog area would be about half an acre, have an architectural fence and all the usual features. (Oakland Dog Owners Group)As mentioned above, according to the East Bay Express, "the Lakeview Dog Park [aka Astro Dog Park) has been in the works since 1998. Dogs are not currently allowed off-leash anywhere around Lake Merritt, and are banned from all of its green spaces. The notion of a dog play area near the lake was first integrated into the Lake Merritt Park Master Plan in 2002. Oakland's Parks and Recreation Advisory Committee approved the park in 2006, but cost concerns stalled the project. This past December, the park appeared to finally be on the verge of breaking ground after receiving approval from the committee a second time." [source]

After that meeting, Jones-Taylor and members of Quan's staff held public outreach meetings for nearby businesses and residents and distributed hundreds of flyers to adjacent buildings. 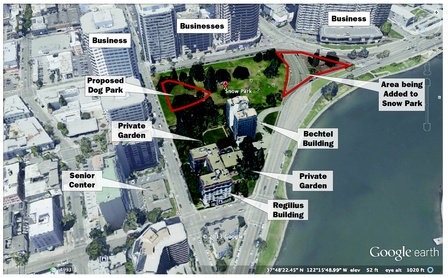 Graphic showing the proposed area, space being added to the park, and adjacent buildings.On Wednesday, April 10th, the city held a Community Design Review of Proposed Dog Play Area at Snow Park– at 6:30 PM (scheduled to end at 8:30 PM). Meeting notes are available here. at Lakeside Park Garden Center, 666 Bellevue Avenue. Per the city: "Public comment and input on the Design Components of a proposed Dog Play Area at Snow Park are sought at this community meeting. General comments will be heard at a future Parks & Recreation Advisory Commission (PRAC) meeting."

On Sept 11th, PRAC will hold another meeting and per ODOG, the Snow Dog Play Area is on the agenda. At this meeting, PRAC will hear a motion to approve a minor conditional use permit for building the dog park, in essence approving it. In its report to PRAC, Parks and Recreation staff has recommended that the proposal be approved.

Against the dog park has been the group Save Astro Park took a hard stand against the proposed dog park. Their reasons a dog park should not be allowed are the following (as listed on their website):

In favor of the Astro Dog Park is the Oakland Dog Owners Group (ODOG).  In their post The Truth About "Save Astro Park" volunteers would be responsible for maintanence, as they are at the Joaquin Miller dog park in the Oakland hills.  ODOG stated that less than 1% of the green space around Lake Merritt will be used as the dog park.