Jean Quan (Chinese: 關麗珍)​ (born October 21, 1949) was the 49th mayor of Oakland, serving from 2010 through 2014. Mayor Quan is the first woman and the first Asian American to be elected Mayor of Oakland. She did not get reelected in the 2014 Election and is working on the transition with her replacement, Libby Schaaf.

She makes appearances at numerous civic events such as Code for Oakland, the Oakland Indie Awards, and Oakland's Christmas parade, and occasionally enjoys a good stroll around Lake Merritt.

As Wikipedia will be happy to tell you, she has come under a great deal of criticism and faced a recall campaign for a variety of reasons including her lack of leadership, evasiveness and dishonesty about public safety in Oakland and her response to Occupy Oakland. She was also minorly ensnared in the lockpickgate scandal of early 2013.

On August 26, 2013, Quan and a bunch of other mayors met with President Barack Obama to discuss youth violence and ask for money. To learn more about it, read her newsletter. This is notable because we will probably hear about it FOREVER. (It's already catching flak.)

Believe it or not, she was once a student activist back at UC Berkeley.

8/4/14 Siegel wins the endorsement of Local 1021. Quan, long the favorite of the unions, came in third in their endorsements. Oakland: Dan Siegel is union's top choice for mayor

4/16/14  Robert Gammon writes an unfavorable editorial on East Bay Express regarding the latest news coming out of City Hall. Loss of two City Administrators within a month, misstatements about the status of the Coliseum City Project and poor performance at the Make Oakland Better Now Public Safety Debate. He basically thinks Jean Quan is going to have a tough re-election race. -> http://www.eastbayexpress.com/oakland/a-rough-time-for-quan/Content?oid=3892646

9/24/13  Mayor Quan found unfavorable by Chamber of Commerce poll!  Oakland Chamber of Commerce published a telephone survey of likely November 2014 Voters and Mayor Quan's voter confidence showed a decline. The poll asked voters if they have a favorable or unfavorable opinion of Jean Quan. Her favorable percentage points dropped from 36 in 2012 to 24. Her unfavorable percentage points increased from 53 points in 2012 to 62 in 2013.  Also 69% of the participants stated that they are likely to vote for someone else next year.   The poll asked several other questions regarding how people feel about Oakland and it's direction. Download the pdf file of the poll here: http://oaklandchamber.com/files/1245.pdf

10/17/13 The Oakland Tribune says Quan should not run for re-election: Citing the above Chamber of Commerce poll on voter dissatisfaction, Tribune asserts it was wrong in thinking she would be a great mayor. They are disappointed in her traveling, her public safety record and made jabs at the "100 Block" program. Read more here: http://www.insidebayarea.com/news/ci_24331054/oakland-tribune-editorial-oakland-mayor-jean-quan-should

10/20/13 East Bay Citizen: One Year in Advance, A Pivotal in Oakland's Mayoral Race Emerges. Steve Taveres notes some both to of the above articles on Jean Quan, but hands out a word of warning: "..before Quan haters rejoice, her demise is long from assured. In fact, she still sits ahead of the pack with both time on her side and the certainty many issues and controversies will arise from here to November 2014." Read more here -> http://www.ebcitizen.com/2013/10/one-year-in-advance-pivotal-moment-in.html

11/5/2013 Mayor Jean Quan responds to Oakland Tribune Editorial: She begins by saying "A mayor of Oakland cannot fear criticism -- it's a tough job that requires an open mind and thick skin. This newspaper recently published an editorial criticizing my job performance thus far, and I welcome this opportunity to discuss where we are on the issues that they and the people I represent care about most.."  Read more here --> http://www.insidebayarea.com/opinion/ci_24410132/jeam-quan-editorial-ignores-our-exceptional-progress-oaklandv=?3

Quan, May 2013. adapted by greenkozi from Quan's newsletter 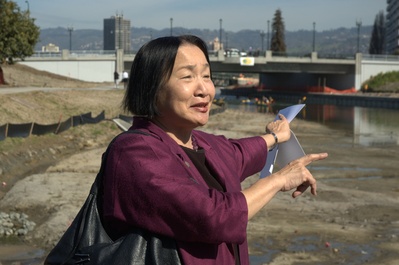 When Jean Quan was running for mayor in 2010 she made some (ill-advised?) rap videos: