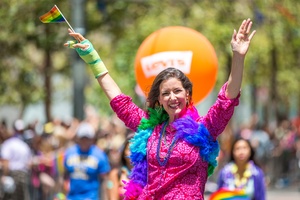 Libby Schaaf is the Mayor of Oakland.  See her inauguration ceremony here. 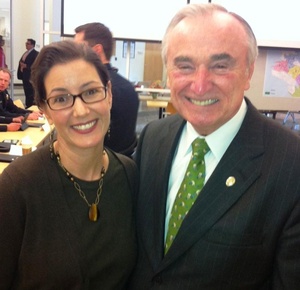 Schaaf with William Bratton1According to her official site, "in 2010, Councilmember Schaaf was elected to serve on the Oakland City Council representing District 4. Born and raised in Oakland's District 4, Libby Schaaf has centered her life and career on building community, solving problems, and leading change in her hometown. Libby spent her youth volunteering through countless Girl Scout projects, at Children's Fairyland, and as a weekly Ranger Station Aide at Joaquin Miller Park. She graduated from Skyline High School. While an attorney in her late 20s, she co-founded the non-profit Oakland Cares, which organized and implemented hundreds of volunteer community improvement projects across the city. She found her calling was building community, so she left her legal career at Oakland's largest law firm to build and run the first centralized volunteer program for Oakland public schools at the Marcus Foster Institute.

As a Councilmember, she served on the Public Safety, Public Works, Life Enrichment, Education Partnership, City-Port Liason, and Rules and Legislation Committees of the Oakland City Council."

In September, 2013, Schaaf ran a feedback survey for her district. See results here.

Libby Schaaf is very open and willing to meet with residents from all over Oakland.

Other Positions in Oakland City Government

2014 is an election year for 2014. Schaaf originally intended to run for reelection for District 4 but ran successfully for Mayor in 2014. View political positions here. Ballotpedia. 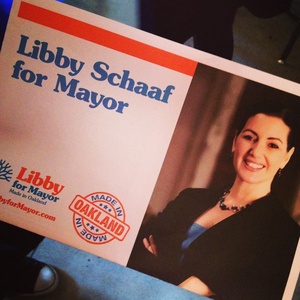 this picture is used via cc via flickr, but caption fell off :(November 6, 2013:  Zennie reported that Libby Schaaf might be considering running. He reported that "her husband Sal has held down the fort while Libby has worked in service to Oakland, so I would think he’s the ultimate decider in this case."

November 8, 2013: The Oakland Tribune posted an article on its website reporting that Councilmember Schaaf has told various political insiders that she intends to run for mayor in 2014.

Libby Schaaf held a fundraiser for her campaign for Mayor of Oakland on March 1 at Penrose Restaurant at 3311 Grand Ave at 10 am.