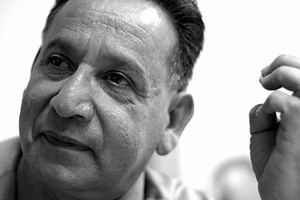 de la Fuente in 2006 (photo CC BY-NC-ND 2.0 by gwen)Ignacio De La Fuente (born January 1, 1949) was an Oakland City council member. He was also the President of Oakland's City Council until January 2009, when he became vice mayor of Oakland.

De La Fuente was born in Mexico City, immigrated to California at the age of 21, and subsequently became an American citizen. De La Fuente settled in Oakland, California and began working in a foundry as a machinist.

De la Fuente came to the US in 1971 on a tourist visa. He subsequently got a work visa and got married. He was naturalized in 1979 and got a US passport in 2002. This first became an issue in approximately 2000 when Gene Burns of KGO alleged that he was an illegal immigrant and thus unfit to hold office. At that time, De la Fuente didn't answer the accusations. In 2002, Burns was upset about De la Fuente's attempt to shut down St Patrick's Abbey, a church in his district after the reverend there sheltered a violent sexual predator. Burns took issue with this and decided to raise the issue again. This time De la Fuente responded with all of his paperwork in a foreshadowing of the 2008 Obama election.1

In 1977 he was elected as a union representative of Phoenix Iron Works. Today De La Fuente serves as an International Vice President for the Glass, Molders, Pottery, Plastics, and Allied Workers International Union, AFL-CIO, where he negotiates for members through the Collective Bargaining process.

First elected to the Oakland City Council in 1992, he served as the chair of the Council's Economic and Community Development Committee until January 1999. When Oakland adopted the Strong-Mayor form of government, that removed the Mayor from the City Council and created the position of Council President. De La Fuente became the first Council member to be elected by his peers to serve as President of the Oakland City Council in 1999. He has been re-elected to this position every two years since then. position being president or position being councilmember? -gk

In 1992 Ignacio de la Fuente was elected to represent District 5, the Fruitvale District which was later rezoned to add Glenview.

Mr. de la Fuente (called IDLF by #oakmtg folks) is a Mexican immigrant that moved to Oakland and became a labor leader. Although very popular in the local labor movement, his pro-development and gentrification stances as well as support for the Gang Injunction made him very few friends in the progressive and activist community.

In 2012 IDLF ran for the city council at large seat and lost, ending his 20 year tenure on Council. Noel Gallo was elected to the D5 seat.

De La Fuente ran unsuccessfully for Mayor of Oakland in 2006, placing second of three major candidates, behind the winner (former Congressman Ron Dellums) but ahead of challenger Nancy Nadel On June 16, 2006, after a careful ballot recount, and a dispute over whether votes for unqualified write-in candidates such as George W. Bush and Homer Simpson counted towards the total, Dellums was declared the winner in the Oakland mayoral race. Dellums garnered the 50.18 percent majority he needed to win the election This was 155 votes more than needed to avoid a runoff. Dellums received 41,992 votes, while De La Fuente received 27,607 votes, and Nadel 10,928 votes.