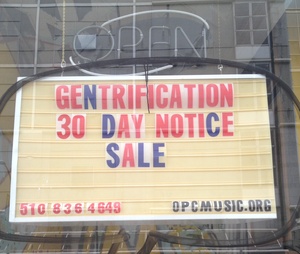 The current wave of gentrification in Oakland is a part of the massive changes in demographics, building projects, and more, across the Bay Area. Oakland has been experiencing gentrification for a number of years and will continue to experience gentrification as long as housing prices keep rising in the Bay Area (especially in San Francisco). Jason Zimmerman wrote his Master’s thesis on Oakland gentrification while studying geography at San Francisco State University in 2010. Zimmerman states his The First Cycle Of Gentrification in West Oakland, California: 1998–2008 thesis “is an attempt to analyze the extent of gentrification that occurred in West Oakland between 1998 and 2008, as well as some efforts among neighborhood residents to manage or mitigate against the more detrimental effects of the process.”

Gentrification in Oakland is an incredibly divisive issue. Many residents feel powerless to affect it and for many people it's unclear how to stop displacement. Other residents and business and political leaders firmly believe that gentrification is a net positive, since it leads to neighborhood improvements and increased levels of commercial activity and taxes, and are baffled by attempts to stop it.  We're trying to figure it out on the wiki - check out what should we do about gentrification?

This East Bay Express article talks about new measures that the City is taking starting at the end of 2013 to help people stay in their homes. Does anyone have any more information about these programs? The source in the article who talks about the City's upcoming programs is: Margaretta Lin, special projects director in the City of Oakland's Community and Economic Development Agency. Any more information here would be very much appreciated. Here's anarticle with a partial answer.

Additionally, check out what should we do about gentrification here on the wiki.

Gentrification can be a tricky thing to have a civil discussion about in person for people who find themselves on different sides of the aisle. It can be hard to keep things civil when it comes to questions of class, race, and fundamentally the question of who belongs. The situation is even more dire because we live in a socially stratified city where people might not even have many opportunities to civilly discuss these kinds of things with the people on the other side of the aisle.

But thanks to the magic of the internet, we get to fight have really productive discussions with each other online as we figure out what and who this city is actually for.

Oakland Local has published a lot of articles about gentrification, especially in their "Community Voices" section where people in the community provide very honest first-person perspectives on gentrification. There's a big list of those articles below in the news section. There was a big brouhaha in early 2014 over a Community Voices that seemed like it was from the perspective of a new transplant from SF. The article was taken down and there was a big mess. You can read about it under "District southeast of Lake Merritt organizes to create neighborhood of their dreams" on Unpopular articles about Oakland.

This video was made by a realtor about the "NOBE neighborhood," trying to make that a thing. Local groups Phat Beets and Stop the Injunctions made this parody video to discuss gentrification in the area.

”[Ghost Town Bulletin Board] has seen much activity recently from Temescal residents seeking solutions to neighborhood crime problems. While eager to treat the symptom, there is no talk of the actual disease: poverty. After posting on the ‘Temescrawlers’ page noting realities of poverty and gentrification, GTBB received this email from a neighborhood resident. It happens that this resident hails from the midwest and has made his home here in Oakland. GTBB responded and there may be lessons we can draw from moving forward as our city inevitably continues to change.

Hi, I saw that you posted a few things on the Temescrawler page. I … feel badly about poverty; I’m a Democrat; I’m a liberal; Obama supporter, all that. I’m just afraid my wife and child will get physically hurt, and I’m scared and I don’t know what to do. I’m glad to talk about poverty. But I must also protect my family. My boy is 6 months old. I see the potential for getting into a “snippy” dialogue with folks on multiple webpages where issues like the uptick in crime in the Temescal are discussed. The problems seem so massive. I’m not trying to gentrify or harm someone’s neighborhood. We bought a home so we could have grass in the backyard. I wanted my child to see grass and not grow up surrounded by concrete. I figured I’d try to communicate with you in a kind, honest, professional way.-Temescrawler

gen·tri·fi·ca·tion : Forced disenfranchisement of poor and working class people from the spaces and places in which they have legitimate social and historical claims.

Hi there sir. Thank you for taking the time to write an email. I understand you are a well-meaning family man looking out for your family’s safety. As you should. In reality, by the time somebody purchases a home, the process is already all but done. The person/family has long since been foreclosed on, evicted, and sent down the road. Oakland is full of bank-owned homes, many of which are now being scooped up by investors (paying cash and undercutting local families trying to buy) in order to market them to better-heeled folks who would but still can’t buy in San Francisco and opt for the ‘good deal’ Oakland provides. I want to perhaps push your boundaries a little. I contend that you should not justify yourself with your party, president, or even by saying you feel badly for the poor. Feelings don’t pay the rent. What are you willing to do about it? Let’s be up front. By saying you want your new neighborhood to be safer, you’re saying you want to rid it of poor people. Or at least the less well-behaved poor people. That’s just the thing - poverty is a horrible place to be, and people do what they can to eat, to get by, and to get out of poverty. Are you willing to put your privilege and comfort on the line to make sure the poor who have made it thus far don’t continue to be forced out of the bay? Do you know who owned your home before you purchased it? A little history lesson: Temescal is not the first neighborhood to drastically change in Oakland in the name of progress. The 7th street corridor in West Oakland was once a thriving district full of black entrepreneurs and black-owned businesses. The route for I-880 & BART were decided to be built on that EXACT ROUTE in the name of regional progress. The disenfranchised black entrepreneurial class that was forced out never fully recovered. Do not succumb to fear. Fear is what has led this country into atrocity after atrocity, against the people here at home or elsewhere. I assume you’re not leaving the area anytime soon, as most gentrifiers are also under mortgages or other financial burdens. Work to build your new community up. Use your privilege for something. Maybe try to acknowledge you are a gentrifier. (You call it ‘The’ Temescal - a realtor’s way of driving rents higher) Then figure out what that means and how your family is going to move forward.”

You can use this here wiki to share your perspectives on gentrification, add articles, and figure out what we should do about gentrification. We even have a community proposals area where you can add your own ideas for how to improve Oakland!

Here are all the entries on the wiki tagged gentrification:

Here is a list of tenants' advocates and tenants' rights resources:

Rapper-poet Chinaka Hodge grew up in various Oakland neighborhoods but is now living between Oakland and LA, where the video was shot. Watsky is from San Francisco (according to the NY Times article).