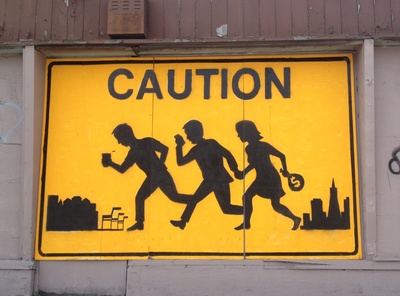 The Caution mural by artist Barbosa Prince is located on the west side of San Leandro Street between 39th and 40th Avenues in Fruitvale Station. The mural is an extrapolation of the famous Immigrant Road Sign made by artist John Hood for use on the US / Mexican border. An example of the sign is on display in the Oakland Museum of California. Barbosa Prince has created a new version of the sign in mural form by making it relevant to a new form of immigration in the bay area. His version looks like a normal crossing sign but the figures running are carrying a coffee mug, a cell phone and a bag of money, and are running from San Francisco to Oakland in a symbol of gentrification. The mural is in an area facing gentrification and has other murals on the subject, like Nuestros Barrios. The artist includes this mural in his Public series, which he describes on his website as "publicly displayed works that press pain points in the social and political landscape."