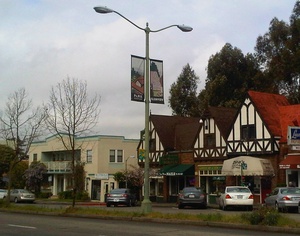 Park Boulevard, Glenview (photo by Himy)Glenview is a neighborhood in the Lower Hills of Oakland with a gentle, residential vibe.  It stretches from the Piedmont border to MacArthur Blvd. and this is reflective in its socio-economic diversity.

Park Blvd. is the main artery of Glenview with a number of shops, restaurants, and grocery stores.

Some of the historic areas/neighborhoods and tracts that form Glenview are the Fourth Avenue District (1907), by Wickham Havens, Cameron Tract and the Carmony Property. Cameron and Carmony were ranchers. These areas were designed for "medium-wage earners" as opposed to the nearby Trestle Glen and Crocker Highlands neighborhoods.1

As one former resident notes [edited for spelling]:

I remember it as a small commercial area on Park Blvd.  At that time Sycamore trees lined the street and streetcar tracks ran from downtown to Liemert. A branch of the Public Library was located near the corner of Wellington and Park Blvd.  Two grocery stores, two pharmacies and a bakery, a barber shop and hair dresser, a dime store, a shoe repair shop, and a cleaner supplied the adjoining residential community with most of their immediate needs.

Glenview is part of District 5, which is predominately located below 580 and predominately Latino. At one of the redistricting meetings in July, 2013, speakers attending (not city officials) said that the inclusion of Glenview in D5 came about for two reasons. First, previous city councils had decided that districts must include areas in the hills and the flats and Glenview was the hill area for D5. Secondly, Ignacio de la Fuente allegedly advocated for the inclusion of Glenview in D5 to get more wealthy, white voters in his district.2

Although the reasons for the inclusion still need to be researched, you can see that Glenview was indeed added to District 5 during the 2003 redistricting process in this map. 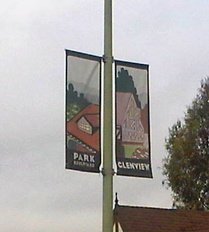 photo by himyGreat post on the history of the Glenview neighborhood as a neighborhood (includes discussion of the name, neighborhood boundaries, and great historical maps): http://oaklanderonline.wordpress.com/maps/

Find out about the Glenview Neighborhood Association on the Glenfriends wiki

Some of this information about local services and merchants may be of interest to people throughout Oakland.