2014 state and municipal midterm elections were held on Tuesday, November 4th across the United States. This page is about the mayoral election in Oakland. Visit the 2014 Elections Portal for all other 2014 elections topics.

Note: The Oakland Wiki 2014 Mayoral Election Team, a group of volunteers, are actively working to keep this page up to date as neutrally as possible. Please feel free to join us by adding content to this page and/or tweeting with the hashtag #oakmtg.

Before you vote, know what your candidate needs to do! (separate page)

These candidates have all filed documents allowing them to fundraise which signals intent to run. The nomination period began July 14th, 2014 and ends August 8, 2014 (unless Jean Quan does not file in which case it is extended until Aug 13, 2014). Check current status of candidates here.

These candidates have qualified for the ballot.

The candidates will appear in the following order on the ballot:

These candidates filed papers but ended up not running or qualifying for the ballot.

The results printed in Matier and Ross’s column in the San Francisco Chronicle show Kaplan leading with 18% of the vote if she enters the race and Quan getting only 10% of votes. Schaff received 16% of the vote and 41% of voters were undecided.

However, Libby Schaaf’s campaign gave the Oakland Post results from the same poll that show Schaaf with 19% of the vote and Quan with 13%, so it’s not exactly clear what the results of this poll actually show. 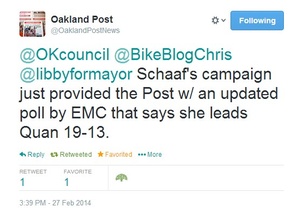 Some excerpts of the survey instrument from an EMC poll from February 5, 2014, commissioned by Libby Schaaf’s campaign: 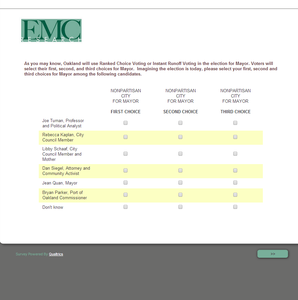 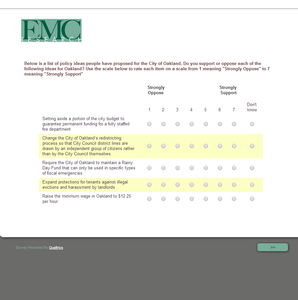 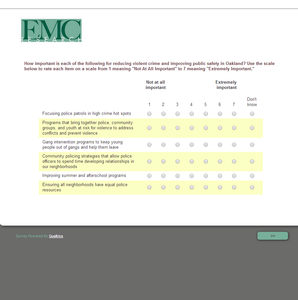 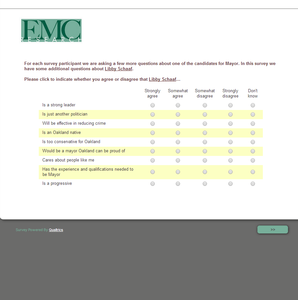 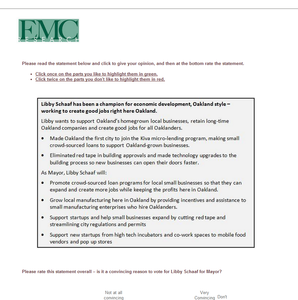 OakMayor2014.com recently commissioned a poll to look at the Oakland mayor’s race and the city council races in districts 2, 4, and 6. The poll was conducted by the Oakland-based public opinion research firm FM3. Respondents were asked their top three choices for mayor, and for city council if applicable, and a simulated ranked-choice voting (RCV) elimination analysis was conducted to determine which candidates would be the likely winners using Oakland’s recently adopted RCV election method.

An additional 300 interviews were conducted in the 2nd, 4th and 6th City Council Districts, yielding the following total number of interviews in each District:

Margin of sampling error of +/-3.7% for the citywide results

Margin of sampling error of +/-6.9% for the City Council District results

Due to rounding, not all percentages sum to 100%

Sizable proportions of voters remain undecided in all four elections, enough to swing any of the elections in the favor of several different candidates.

Full results, crosstabs, and the survey instrument are posted on oakmayor2014.com: LINK

Mayoral candidates started showing up in May 2013. According a May East Bay Citizen article, Bryan Parker, Gilda Gonzales*, Joe Tuman and Courtney Ruby* were considering running. According to the same article, Councilmember Rebecca Kaplan will not be running for mayor.1*As of May 31, 2013, Ruby and Gonzales are not running for mayor. Ruby is running for re-election for auditor. Alameda County supervisor. Nate Miley had also been rumored but is not entering the race. Rebecca Kaplan had been mentioned but is not running.2

On July 8th, Joe Tuman sent out a newsletter saying he was exploring running for mayor.

On July 29, Joe Tuman sent out an email saying, “A few days ago I formally entered the race to become the next Mayor of Oakland. The response has been overwhelmingly positive and supportive. Now I am asking you to join me in this journey to provide real leadership and solutions for our city. . . . .”

On January 31st, the first real funding cycle ended and the Oakland Tribune published an article revealing that the total funds raised were this: (you can see all of this for yourself in the same place where you check who’s running in the yellowish box above.)

In February, 2014, a spoof (?) candidate was created: A dog named Einstein is running for mayor. His platform is less police, no surveillance, etc.

www.oakmayor2014.com is a website designed to be an information portal for the November 2014 Oakland mayoral election. This website is organized by Oaklanders Phil Tagami and Joshua Daniels who believe there needs to be a place where Oakland voters can come to get clear, unbiased information on the candidates and the issues.

Throughout the mayoral campaign, OakMayor 2014 will ask all of the candidates questions and then post all of their responses online. With 15 candidates for mayor, a traditional debate becomes all but impossible. Our hope with the candidate question section of the site is that by giving all the candidates ample time to respond and posting all the responses together, that it will make it easier for voters to meaningfully compare and contrast the positions of the candidates on numerous important issues.

Links to candidate pages on OakMayor2014:

The site also includes extensive information on the voting process, voting by mail, Ranked-Choice Voting, how to register to vote, candidates' campaign finances, historical voter turnout, voting rights for those with convictions, and links and summaries of the latest relevant news articles on the Oakland mayoral race.

VOTER INFORMATION (Voting by mail, registering to vote, important dates, voting rights for those with convictions and/or incarcerated.

HISTORICAL VOTER TURNOUT (Analysis and overview of historical voter turnout in the City of Oakland.)

CAMPAIGN FINANCES (Total amount raised by each candidate, with links to all campaign filings.)

Please add questions (and answers) below. We should also incorporate answers into the main text once we figure out the answers!

Question that arrived via email to [email protected] in 11/13: “I have found it hard to locate the date by which 2014 mayoral candidates must file papers declaring their candidacy. I think that would be interesting to include…”

Question: All of the 410s and 501s filled out so far (December 3) by candidates are marked nonpartisan. Are these candidates truly without a party or is there another reason for not marking them as such?