Larry Reid was first elected to City Council in District 7 1996 and took office in 1997. See some of his positions here.

As of June 2, 2014, numerous sources (such as EB Citizen and the Oakland Tribune) are reporting that he intends to resign in the near future due to poor health. Reid is 64 and has had two heart surgeries. This follows online reports that his staff member Ray Leon may be resigning. Reid told the Tribune that his daughter Treva Reid is interested in his seat. If Reid resigns more than 120 days before the election, Council can appoint someone to fill his seat. This person becomes ineligible to run for reelection. Otherwise, a special election could be held. Other possible candidates include Alameda County Board of Education member Marlon McWilson, Reid's Chief of Staff Iris Merriouns, former Councilmember Ignacio De La Fuente, (who now lives in D7) and Pastor Zac Carey.13 Notably absent is Ray Leon.

On March 3, 2015, Larry Reid again threatened retirement, this time because a young man, Marcus West, was killed in his district.14

Democrat (note- this is only from a list of endorsements) 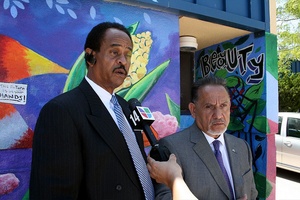 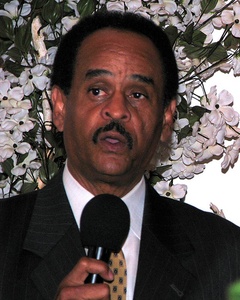 Reid in 2008. photo ccby 2.0 by sfmission.comLarry Reid became involved in the City of Oakland when Elihu Harris was elected as Mayor.  Reid was Harris' aide. Prior to that, he was chief of staff of Councilmember Aleta Cannon. He is married and has six children. He attended the University of Cincinnati. Reid served in the marines.

Larry Reid served as Council President from 2011-2012. He tried unsuccessfully for the position in 2007.4 He was President during Occupy Oakland and many meetings were very raucous. #oakmtg watchers often played drinking games to the amount of times Larry Reid threatened to have someone removed or to have the chambers cleared. He backed an ordinance to shut down parts of chambers.10 Prior to being Council President, Reid was chair of the Public Safety committee for 10 years. His tenure oversaw the Negotiated Settlement Agreement and was generally not considered particularly successful.7

Larry Reid seems to go back and forth on public safety: he will sometimes vote for increasing public safety budgets and spending and at other times vote against police actions. It doesn't seem that he has a coherent platform, though if someone knows more, please fill it in. See Wikipedia page for examples of inconsistency. In early 2013, after a string of shootings, he was among the group that called on Governor Jerry Brown to issue a state of emergency in Oakland.6

Reid has come under fire for misconduct during the Ruby Report. He has also been accused of letting Tom Chasm pay for preferential treatment.5

There is little about Reid's positions online. He did not attend a 2012 District 7 debate due to a health emergency.8 That year he cited a lot of business development in his district as well as the addition of more affordable housing. He said that a new Ross Dress for Less, a Chase Bank and a Foods Co grocery outlet were on their way in. However, there are still serious problems in his district including foreclosure, blight, dumping, gangs, drugs and violence. According to the Tribune, he was "slow in making banks responsible for the upkeep of blighted foreclosed properties and has shown a pattern of uninformed decisions." He was quoted as saying that Council jobs are "supposed to be part-time" and often acts like he's in a hurry to leave Council meets- rushing to move motions and mentioning TV shows he'd rather be watching. According to the same article, he's been thwarted in his public safety efforts by other members of the council.9

In March, 2014, a citizen proposed putting "lovelife" on the Welcome to Oakland signs. Reid offered to sponsor legislation and, if cost was a concern, to pay for the change.12

Reid on smoking and free will and trucks.

Larry Reid has a very low presence online. He has a facebook page that is rarely updated. If he has an e-newsletter, please fill it in here, as multiple people have looked and have been unable to find it.

On August 27, 2013, the San Francisco Chronicle reported that Reid was not running for Mayor. He said that he was not concerned about raising the money but that his daughter convinced him that the job would kill him because of his poor health.11

A video by Zennie of a very strange speech by Larry Reid during the July 25th censure hearing. (Note: the history at the beginning of the video is his opinion.)

Mentally and physically. Often he seems very checked out. He's been absent for a large stretch of City Council meetings and committee meetings in 2013. See article.