Libby Schaaf is the new mayor-elect of Oakland.

Please see the 2014 Mayoral Election page for background on this year's race. See 2014 Election Results page for who won and what passed.

Schaaf won the election with 62.79% of the final vote, with her winning threshold coming after Jean Quan was eliminated in the 14th round of Ranked Choice tallying.

Round by round Ranked Choice results: pass_report.pdf Note: these are the tallies before absentee ballots have been counted.

Very cool interactive visualization showing the redistribution of votes in the last 6 rounds: 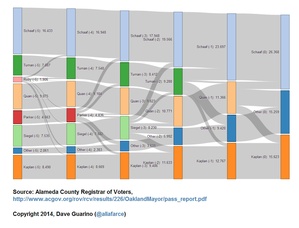 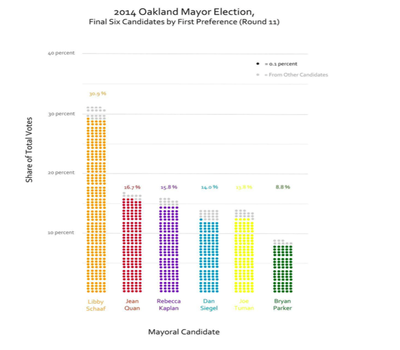 A round-by-round analysis of the election tabulation process.

A round-by-round analysis of the election tabulation process can be read here: Oakland2014-RCVGraphics.pdf