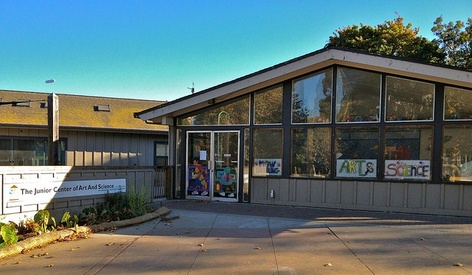 Oakland Junior League members searched for new ideas for community projects which would enhance the city, following World War II.  After meeting with an advisory committee of artists, city officials, community leaders, educators, and scientists, the idea for a children's community center which encouraged creative talents was proposed.

The Junior League combined forces with the Art League of the East Bay and the East Bay Children's Theatre, and in 1949 the groups conducted a lengthy study into the creation of a "Junior Center" for the city's children.

The three private organizations were invited by the City of Oakland Parks and Recreation to establish the proposed "Junior Center" in the centrally located Mosswood Park.  Five years of fundraising by the Junior League, the Art League and the East Bay Children's Theatre netted $70,000, and the City of Oakland allocated an additional $70,000 for the construction of the new Junior Center of Art facility.  The grand opening was in May 1954, and inspired by the pioneering space travel, the Junior Center included 'Science' in the name to become the 'Junior Center of Art and Science' by the end of the 1950's.

April 1992 saw the move of the Junior Center of Art and Science to Lakeside Park on the shores of Lake Merritt.