A gaggle of pooping machines, hanging out at the Lake with their enabling seagull buddies, and Walt Whitman

Love ’em or hate ’em, we all know what these are.

{Oh, my goodness! What exactly is this writer implying? I don't agree at all with the previous writer (previous paragraph  is by a diff. writer) I love to live in this area! Lake Merritt is the home of hundreds of species of native birds. Throughout the year residents can take an up-close look at the exotic migratory birds that stop to rest at the lake during their annual travels. }

-- {Hello, Noah--assuming the picture credit is also the writer), you are trying to set everyone up to feel ok about the destruction of these animals who depend on this area as it has been a migratory route for a long, long time? And you are telling us we can't figure out a humane way to deal with crowded environments? Well, here is the thing, these problems are not so hard to solve (for people who are educated to resolve such dilemmas in a more humanistic way). One thing is that birds don't eat bread, they eat seed. This is something that we could use taxes for if the scumbag greedy rich would pay their taxes, in lieau of that someone can set up a bird seed fund, can they not? Do their civic doody, so to speak? Next, signs for people: "Please don't feed the birds or geese bread" In all the various languages of the people living here and even images so one cam understand it! There ya--go! Jobs for artists, anthropologists and artists right there-a win-win-win for all involved!}

Many people nowadays assume these geese have “always been here.” Well, that depends on how you define “here.” Canada (not ‘Canadian’) geese have likely always passed through here on their annual migrations, and at certain times of year you’d see tons of them for a few weeks … and then they’d be off.

{They were here before we got here, so let's try to respect them, shall we?}

But at some point (if memory serves, it was in the 1980s – but could’ve been as recently as the ’90s), they all somehow suddenly divined—almost to a bird—that, hey, Lake Merritt is a bird sanctuary: we’re safe here. And ya know, it’s a pretty good life … right here in Oakland … year ’round.

{Haha, you mean the 1880's? Actually it was way before that they have been using it as a bird sanctuary.}

Within a few years, hundreds had blown off migrating, and they Occupied the Lake 24/7/365. (That’s when goose poop first became an issue. In minor amounts, it acts like fertilizer; but the prodigious quantities these thundering herds crank out are enough to kill grass and compel people to watch their step, to avoid the stinky, disease-ridden mess.)

If you can believe it, (*cue the dramatic music*) the flock was deliberately built! Oakland's Neighborhoods by Erika Mailman says, "According to Paul Covel, who was the naturalist at the lake's wildlife refuge from 1934 to 1975, word was sent to ranchers in the Sacramento valley that the lake was looking for Canada geese. Covel and assistants traveled to Dixon to capture nine geese that were enjoying a farmer's pasture." Covel writes in his book, People Are For the Birds: "As soon as I moved in as a full-time park naturalist, I determined to build up a flock of these desirable birds."

{Even if that were true, and I think you have something to gain from the destruction of the birds, therefore I do not believe you. But even if it were true, no matter how these geese came to be here or how you decided that they were lazy too to leave--what about how hot it is everywhere else due to the warming from all the Co2 emissions from our choice of vehicular transport, therefore making it impossible, especially these last 10 years or so, to make the migration, for these geese.}

{Why not find a humane way to move them if all the people concerned feel that they must be moved, but I think there are probably a lot of people who are very protective of these geese and would like to see them live and thrive amongst humans since they were actually here before us.}

My main concern with all of this, however, is the example these opportunistic Canada geese are setting for other birds intelligent enough to learn from them. You can already see the bad influence they’ve had on black-crowned night herons, if you keep an eye on the roof of the KFC across from the Grand Lake Theater.

You might also find geese (Canada or otherwise) at the Paramount...

One more thing. As schoolkids back in the day, we were told it was just as well these birds were protected—they weren’t edible anyway. Years later, while living in Maryland, I repeated that “fact” to our neighbor, an outdoorsman and avid hunter. He just looked at me quizzically, then handed me a sample of smoked goose he’d prepared himself. Since I’m a vegetarian, I just thanked him and took it home … but no sooner did I walk in, than I got mobbed on.

Don’t touch these geese, because it’s against our law … but the truth is, they’re not just edible … they’re flippin’ delicious!

{Are you trying to get us ready to see birds being abducted for the nightly meal, or something? Gross! No bueno!} 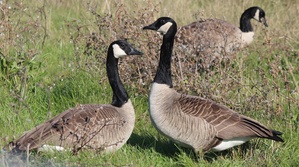 As mentioned above, Canada Geese are ubiquitous in Oakland. Please share your CG experiences and opinions below.

I worked across the street from Lake Merritt for many year's - Grand Avenue @ El Embarcadero - and grew to really enjoy these birds, especially the results of their annual mating activities! The little balls of fluff which eventually become the big birds are adorable. I also became personally involved with one bird; I called her Ruffled Feather - she was limping badly and had a badly injured wing; likely the result of a dog attack. I assume dog as I doubt any of the regions  natural predators get this far into the Town (coyote; mountain lion; fox). 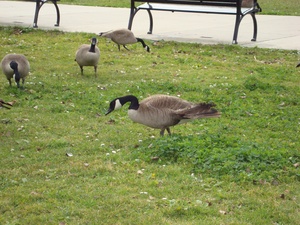 I called the good folks at the Lindsay Wildlife Animal Rehabilitation Center and they advised that as long as she was getting around and eating that hopefully the damaged feathers will molt out and new feathers would grow in - what I had to find out was whether or not there was damage to her flight feathers. 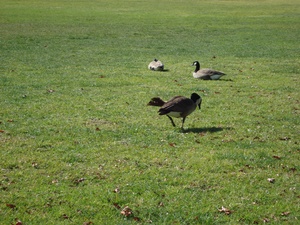 I ended up keeping an eye on her for about 1 1/2 months; she always seemed just fine, just with Ruffled Feathers; however, I never saw her fly which worried me. Could she escape danger? She couldn't fly away from another attack?

Although, I swear, sometimes I think these birds have gotten so comfortable that they forget they can fly, as evidenced by the number of REALLY, REALLY close calls I have seen between car and goose, which the goose could have easily flown out of the way of easily!

At about the month and half mark, I noticed she was a bit wobbly on her feet and that she was now spending most of her time alone, away from the gaggle - probably a bad sign. I noticed that she was still eating / foraging and that except for the wobbly gait and ruffled feathers, she generally looked okay, but what do I know, I'm an office proletarian not a naturalist.

I was worried though, so, I decided to try to get a closer look at her and see if I could see anything seriously wrong; as I approached her, she got up and started heading out - she looked back and noticed that I was still approaching and squaked at me; I persisted, finally Miss Ruffled Feather's had had enough of me and began to trot away from me and then it happened, she spread her wings and away she went - I lost sight of her as she was continuing to ascend and already halfway across the Lake. I never saw her again - or at least I don't think I have - maybe the feathers indeed molted out and she is now just one of gaggle. Maybe she skirted off back to Canada, or maybe... 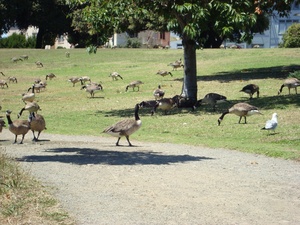 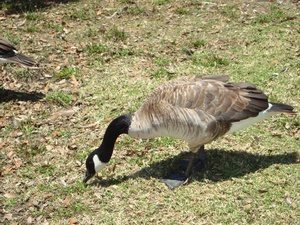