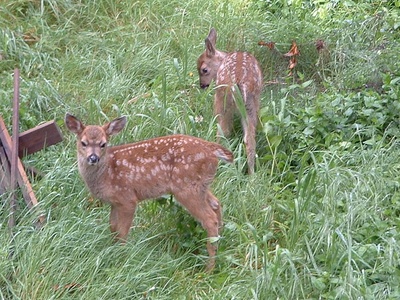 pair of fawns
photo from Our OaklandDeer (Odocoileus hemionus columbianus, Black-tailed deer or Odocoileus hemionus californicus, California mule deer; hunters are very keen on the minor differences) abound in the Oakland hills. They’re often seen early in the morning as they vacate a yard; sometimes they only leave eaten plants and piles of pellets as evidence they’ve been there. Some people go to great lengths to try to keep the deer out of their yards, while others welcome them as wildlife that’s lived there longer than people.

Does give birth in the spring, usually to one or two fawns. Bucks are generally solitary except during mating season, and less commonly seen. Most often you’ll see a doe and this year’s fawn(s) and possibly last year’s juveniles, too.

Deer are most active in the morning and in the evening at twilight, but can be moving around any time. If you’re driving and see a deer run across the road, stop and wait before proceeding. Frequently a deer you see is being followed by others that you don’t. If you keep driving when you see the first, you’re likely to hit the second. Although the OPD infamously made news in 2010 when they cornered and killed a young deer 1, in general cars are a much bigger hazard for them.

Deer and your plants

People sometimes suggest planting “deer-proof” plants for landscaping. In practice, there’s no such thing, there are simply plants that deer like less than others. In the fall when food is more limited, deer will eat a surprising range of plants. Young deer that haven’t learned yet will try taking a bite out of all sorts of plants. The Wikipedia article on California mule deer 2 says they’ll eat fruit off trees and even pet food. Our bird feeder used to get emptied very quickly until we spied a deer standing on its hind legs, licking bird seed out; the problem stopped after I put the feeder on a taller pole.

Deer do have favorite plants, including roses. Wildcare has a list of suggested “deer-resistant” plants here. Do not intentionally feed deer, even if you can’t help unintentionally feeding them.

What to do if you see a young or injured deer:

Leave it alone! If you see a baby deer (still has spots) and it appears to be without a mother, most likely the mother is nearby just not visible. You are likely to freak out the mother by approaching the baby. If a baby deer stays for an extended period of time (after you’ve left it alone) you can call Oakland Animal Services or Yggdrasil Urban Wildlife Rescue. If you see a deer that appears injured, evaluate before rushing to panic: deer can live through crazy injuries including broken bones. They may limp around happily for years. Being captured and treated for these injuries is really awful for them, so the only realistic option for the majority of them is “dispatching” them, or being shot. This is actually more humane than being euthanized as it doesn’t require interaction with humans.

What to do with dead deer:

Dead deer are a common sight in the Oakland hills in the spring and summer. It’s gross. If the deer are on your property, you are ultimately responsible for disposing of them (or not). Oakland Animal Services picks up dead animals, but it usually takes awhile—living animals come first. They charge for disposal of animals on private property. If you call ahead, you can drop off the dead animal for disposal. 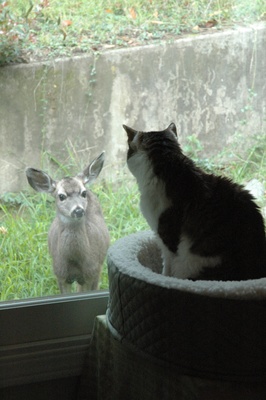 inter-species curiosity
photo from Our Oakland 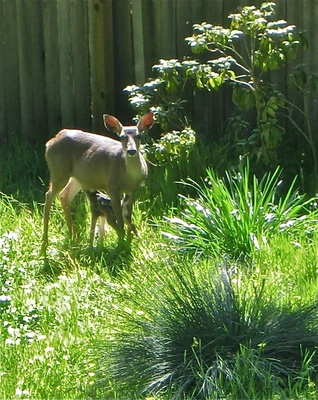 D’oh! A deer - a female deer - and her fawn
photo from Our Oakland