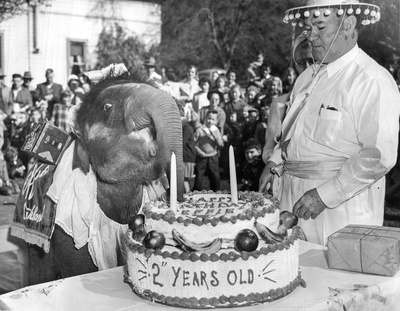 Miss Effie (Sue), was an extremely popular and much beloved Asian elephant who lived at the Oakland Zoo from 1951 until her death on June 1, 1985 at the age of 35. Captured in the wild, it was believed that Miss Effie had been born in 1950. She previously lived at Busch Garden in Tampa, Florida before coming to Oakland.2

[There is conflicting information as to whether or not she was moved to the Portland Zoo before her death 3 ... but I seem to recall she lived out her life in Oakland ... does anyone remember her and what happened??]

This says she moved to Portland then was shuffled around a bit and died in Florida.

Humorous article from the Toledo Blade entitled Man Plays Cupid For Lonely Elephant ...  "A lonesome, unloved elephant has transformed Oakland City Councilman Dan Marovich into a cupid for pachyderms.  He started out yesterday trying to raise a dowry for Effie, 11-year-old, 2-1/2 ton darling of Oakland's zoo.  Effie has everything, including sex appeal and a new steam heated apartment.  Everything, that is, except a boy friend.  Isolated For 10 Years ... In her 10 years at Knowland State Arboretum and Park, Effie has never even seen another elephant.  It was the new apartment that really aroused Mr. Marovich's concern for the love life of elephants and Effie in particular.  It even has a guest room and large patio.  But it is on a hilltop out of sight of even the lesser animals.  This lonely life led Mr. Marovich to ask the city council to appropriate $3,000 to buy Effie a mate.  Light Touch - Added ... "That isn't peanuts," quipped Councilman Felix Chialvo.  "Haven't you ever been lonely," retorted Mr. Marovich.  "Not for an elephant," interjected Mayor John C. Houlihan.  "But Effie is," Mr. Marovich insisted.  He suggested a fund-raising campaign and was named chairman.  First contribution was a $100 pledge from the Oakland Boosters Club.  Dr. Ray Young, zoo director, vouched for Effie's appeal to an elephant boy-friend.  He said she does an earth-shaking hula, blasts out a mean trumpet call and has gracious manners."  1