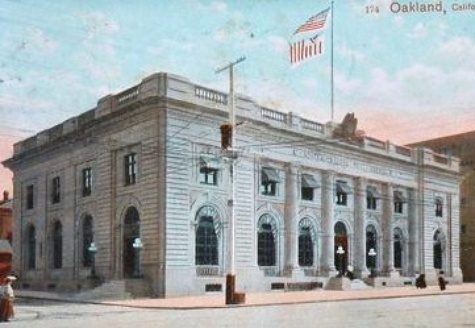 The first post office in what is now Oakland opened in 1851 at the corner of Main Street (later renamed Broadway) and 1st Street (now Embarcadero West), in Oakland’s first hotel, the Oakland House. At that time Oakland was only a village known as “Contra Costa” ( meaning the ‘other coast’ ). The name Oakland was first applied to the community in 1852 when the California Legislature passed Carpentier's bill creating the Town of Oakland. Note also that the village and town were originally part of Contra Costa County, since Alameda County was not created until 1853. The United States Post Office finally recognized Oakland as a legitimate address in 1855.