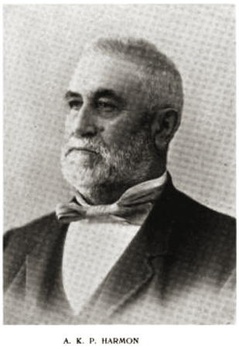 Albion Keith Paris Harmon (1821–1896), known as A.K.P., was an Oakland financier and mining3 magnate. He became rich investing in the Comstock mines using seed money obtained from a general store operation in Sacramento.

Harmon moved to Oakland in 1872. His 6-acre estate, which ran from Webster Street down to the lake side along what is now Grand Avenue, included a nationally-renowned conservatory filled with beautiful plants, and vineries.

A shrewd man, Harmon funded a number of key projects. In loaning W.E. Dargie the money to buy the Oakland Tribune, he guaranteed himself sympathetic press coverage for any future endeavors, plus he created a cozy job (secretary of the Tribune Publishing Co.) for his son A.K.P. Jr. (These strategic motives at least are clear; there may have been others.) In 1879, Harmon was pushing 60 and had recently lost his wife, Marietta; reviewing his life and legacy, he no doubt realized that acquiescing to his pushy son-in-law’s insistence that he donate a building to UC Berkeley would neatly cement his philanthropic reputation for perpetuity. This $15,000 wooden Men’s Gym, Cal’s first indoor athletic facility, was later rebuilt and formally renamed Harmon Gym in 1959.1 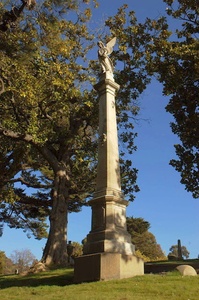 All 5 A.K.P. Harmons (the most recent being A.K.P. Harmon V, who died July 8, 1971) are buried together in Mountain View Cemetery. Their family monument is capped by an angel, and the entry stairs flanked by a pair of urns.