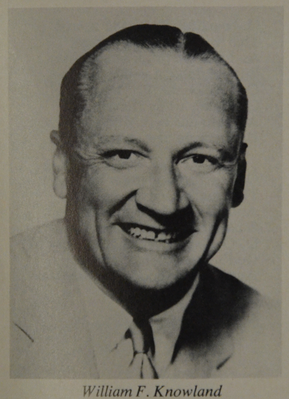 from The Beginnings of Oakland by Peter T. ConmyWilliam Fife Knowland (June 26, 1908–February 23, 1974) became editor, president, and publisher of the Oakland Tribune, following the death of his father, Joseph R. Knowland in 1966.

Knowland was elected to the State Assembly in 1932, and to the State Senate in 1934, serving until 1938. Knowland's political career was put on hold for a few years while he served in the U.S. Army. On August 14, 1945, he was appointed by governor Earl Warren to fill the seat of U.S. Senator Hiram Johnson.

Knowland divorced his wife of 46 years, Helen Davis Herrick (Knowland) in 1972 because of "irreconcilable differences", a quiet way of referring to his affairs. He briefly married Ann Dickson (Knowland) on April 29, 1972, but they were estranged by the end of that year. Knowland was heavily in debt, owing over $900,000 for gambling debts. On February 23, 1973, just two days after celebrating the 100th anniversary of the Oakland Tribune, Knowland died of a self-inflicted gunshot wound at his summer home near Guerneville, CA.

The remains of William F. Knowland were cremated and he is interred at Mountain View Cemetery in Oakland, in the main columbarium Section M - 8 - 5.