The Knave was a newspaper column in the Oakland Tribune, written by different people over the years. While it most often refers to the history column, The Knave started February 15, 1902 as a political and gossip column. 6

It appeared inconsistently on Saturdays until June, 1906, when it became a regular Sunday feature. Much of the content was about the slowness of insurance companies to pay claims and other problems following the 1906 earthquake. 7

The writers of the column were Joseph Eugene Baker (author of Past and Present of Alameda County) (-1914), Paul Goldsmith (-1938) 6, Addison "Ad" Brown Schuster 1 (-1953) and Leonard Verbarg (1954-1974). Regular contributors to the column included John Winkley, Henry Mauldin, Rockwell D. Hunt, Alex Rosborough, F. Hal Higgins and Charles M. Loring. 2 Dave Hope started the Daily Knave column in 1933 and oversaw it until its demise in 1959. 6

The column was discontinued in 1974 after the death of Tribune editor and publisher William F. Knowland.

Celebrities at Your Doorstep 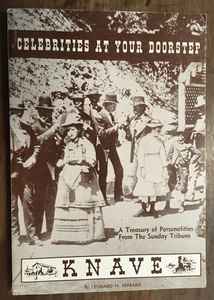 CC SA-BY Our OaklandIn 1972, Leonard Verbarg took a selection from past Knave columns and created the book, Celebrities at Your Doorstep: A Treasury of Personalities from The Sunday Tribune, which was published by the Alameda County Historical Society.

Some of the people featured in Celebrities at Your Doorstep (CAYD) include: