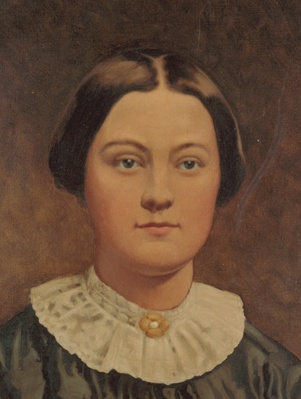 Oakland History Room at Oakland Public LibraryHannah Jayne Adams (born c.1831 – ?) was Oakland's first school teacher, and the sister of early Council Member Anselm H Jayne. Her family arrived in California after traveling overland across the isthmus of Panama. According to Lives of the Dead, her schoolhouse was at the corner of Fifth & Clay and cost $1,000 to construct. 1Oakland: The Story of a City says:

"The first Oakland teacher, Hanna Jayne, was the only teacher until January 1855, and had the whole responsibility for schooling on her shoulders. When it was decided that this was too much for one person, a man was hired to become the principal and she became his assistant. Neither Miss Jayne nor the man, Franklin Warner, received any pay for some time because the town marshal absconded with the funds." 2

A footnote in The Story of Cyrus and Susan Mills by Elias Olan James suggests Jayne was a graduate of Mount Holyoke College, class of 1855. However, the school’s directory listed her as class of 1853. 3

She is buried in the imposing family mausoleum in Mountain View Cemetery, although only Edson's name appears on the exterior.