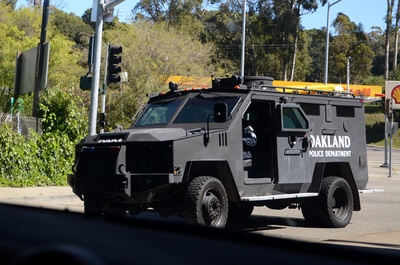 CC SA-BY Our OaklandThe Lenco Bearcat APC (Armored Personnel Carrier) is a 2008 model year armored truck that belongs to the Oakland Police Department. It's smaller than its cousin, the Alameda County Sheriffs Department Blackwater Grizzly APC. It was used on March 18, 2014, as part of a joint narcotics and weapon raid with the FBI in the 2300 block of 90th Avenue. It was also used in the response to the Oikos University Shooting in 2012.

Photos from the 2011 Urban Shield training event showing the Oakland Police Department Bearcat, along with photos of a newer Bearcat apparently owned by the Alameda County Sheriff's Office, can also be found on Flickr.2

According to the Wikipedia page, it is frequently used to transport SWAT officers "to and from hostile situations and to assist with the recovery and protection of civilians in harm's way during terrorist threats, hostage incidents or encounters with armed offenders." 1