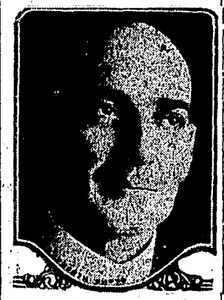 Fred F Morse8In 1917, Morse defeated the incumbent Harry Anderson who had served for two terms. He was backed by the "Taxpayers' League, Inc."3

During the influenza outbreak, Morse stated that he would tell the police to enforce the anti-spitting ordinance.  (It appears he was now the commissioner of public health and safety.)

While Commissioner, both police and fire got raises.9

In 1919, Morse and Police Chief J. Frank Lynch were accused of taking bribes in a Chinese lottery scandal that was engulfing former police chief John Henry Nedderman.10 (It appears Morse himself had appointed Nedderman after he fired Walter J. Petersen on taking office.15) He was eventually sued for not doing anything about Nedderman's bad behavior.11 Shortly after that, Morse reorganized the Police Department. He shipped one Captain Bock (also prominent in the bribery scandal) out to the Melrose station and brought William F. Woods (former Chief, but recently of the Melrose station) back in from exile. Lynch told Morse that the city was free of gambling and alcohol, but Morse ran his own private investigation and found otherwise, leading to many changes.12 It didn't end there: in 1920, Morse alleged that the police department was actually manufacturing and selling booze and launched and investigation.13 At one point, some police officers and firemen won a suit to get their jobs back and Morse stated that he would due his best to find jobs for men who "know, hear and see nothing."14

Morse was also sued in 1920 for negligence in his job and violating the charter. Plaintiffs alleged that Morse had no right to dismiss Petersen.16 (It ain't easy running the Oakland Police Department.)

Along with Soderberg and Edwards, Morse was involved in a recall election in 1920.

In 1921, Morse did not qualify for the ballot for reelection and demanded a recount. He lost by 84 votes and stated that 400 mistakes were made on ballots.5 He was accused of running a dirty campaign, with supporters collecting donations (it appears that was illegal?)6

Although there isn't much context on this (need more), it appears that Morse was not a very progressive man and didn't run a very progressive police department: In 1919, Oakland was working towards making the East Bay "for Americans Only," and Morse was all for this. An ordinance was passed need to find and Morse stated that

"Oakland henceforth is for Americans only. Under my personal supervision the Police Department of Oakland is going to stamp out radicalism and the forerunner of Bolshevism... The time has arrived for stern measures. I am going to see that the necessary and proper action against foreign agitators is taken."20

Morse was president of the Morse Realty Company (which may have been the same as a business he was involved in called the Minney-Morse Co, which provided real estate, loans and insurance and was located at 1259 Broadway). He had five children including four who served in the war.7