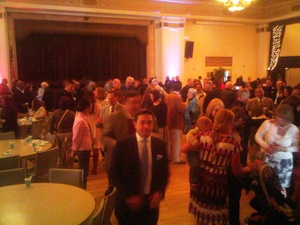 Reception after the Ceremony ( Photo by HiMY SYeD ) 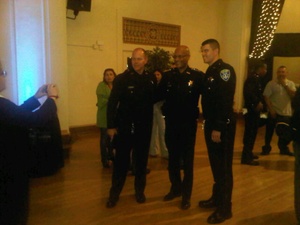 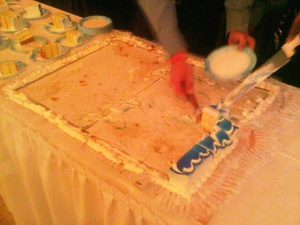 Friday, March 22, 2013 at 10:00 AM, the 166th Oakland Police Academy graduated at the Scottish Rite Center. This is the first Oakland Police Department graduation in over four years.

The ceremony brought cheers from the crowd as Chief Jordan announced the names of the new officers and spoke of how uplifting and motivational it is to have new officers join the ranks of the Oakland and Vallejo police departments. The Chief went on to say, “These new officers, the future of law enforcement, have joined our family today and will be serving our community tomorrow.”

The 167th Academy was in attendance. They start their six-month training on Monday, March 25.

While most trainees received their badges from Chief Howard A. Jordan, seven had the honor of being pinned by members of their own family who also serve or served in lawenforcement:

Four members of the 166th academy were honored for their achievements during the six-month training period. Officer Anthony Martinelli was awarded Top Gun for highest overall score in the firearms qualification practical examination, which includes both shotgun and handgun testing. Officer Jonathan Douglass was awarded the Physical Fitness award for achieving the highest overall point total in the physical training assessment tests and the POST work sample test battery. Officer Austin Leffler was honored for excellence in academic achievement for highest combined total in all academic learning domains. And for highest overall academic and performance standing in the class, Officer Brenton Lowe was named class valedictorian.

Our new officers are a diverse mix of ethnicities, and nationalities. Seven are women; 31 are men. Most are college graduates. Several are bilingual (in Spanish, Cantonese, Mandarin, Vietnamese, Cambodian, Russian, Farsi, and even American Sign Language).

With palpable pride, the new officers vowed to protect, honor, and serve.