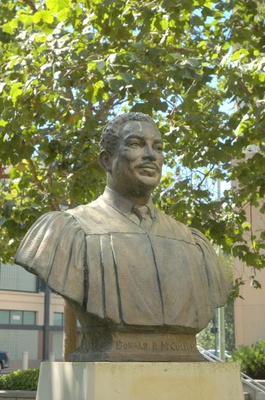 CC SA-BY Our OaklandDonald Pitts McCullum (January 28, 1928 – December 25, 1988) was a judge and life-long social justice advocate in Oakland. The San Francisco Examiner's Image Magazine called him "one of three great contributors to Bay Area social justice in the past 100 years." 2

McCullum was a highly decorated officer in the Navy during the Korean War. Starting in the 1950s he was active as a civil rights attorney and in the NAACP. He served as Deputy District Attorney of Alameda County.

In the 1970s, McCullum was city attorney of Berkeley while also running his own law firm. He resigned after the Berkeley city council voted to prohibit outside employment by department heads. 3

He was a judge with the Alameda County Superior Court from 1977 until his death in 1988. A tribute from Rep. Ron Dellums in the Congressional Record states that Judge McCullum was appointed to the California appeals court in 1982 and and the California Supreme Court in 1984, 2 but this portion of the tribute information is not correct, since multiple sources from 1982-1988 continue to refer to him as a Superior Court judge, including a reference to California Courts and Judges which notes that the woman who replaced him as an Alameda County judge after his death was appointed on January 17, 1989.4

Donald was born in 1928, in Little Rock, Arkansas, to Charles A. McCullum and Irene Pitts (McCullum). He was the fourth of six children; his siblings were Laura McCullum, Charles McCullum, Leander McCullum, James Thomas McCullum, and Ernize McCullum (Adams). In 1953, McCullum graduated from the Boston University School of Law, and married Peggy Cook (McCullum). They had three children, Donald A. McCullum, Erica McCullum, and Peggy Lisa McCullum (Godfrey). 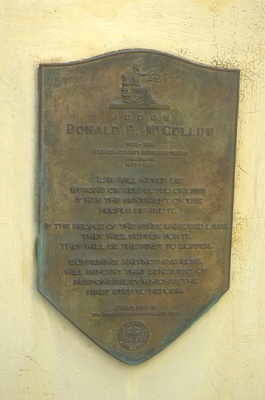 CC SA-BY Our OaklandThe Donald P. McCullum Youth Court was named after him. There is a bust of Donald McCullum downtown in the plaza by the Federal Building, created in 1997. The inscription reads:

McCullum died December 25, 1988. His parents and a number of his siblings moved to Oakland as well, but the whereabouts of their remains is unknown.