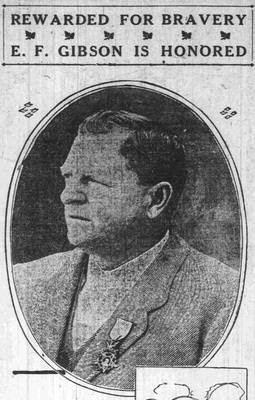 Edward Herrick Gibson (July 4, 1867 – April 25, 1942) was an Oakland resident and received the Medal of Honor for his actions during the Philippine-American War. There is some confusion about his middle initial, sometimes appearing as H, N, or F. It appears as H in most records and on his grave marker, but as F in the 1911 articles about him, and N on the certificate accompanying his medal.

Edward Gibson received the medal for getting soldiers under his command across a river while under heavy enemy fire. This was the same action that Antoine Gaujot was awarded the Medal of Honor for. They attempted to find a ford across the river, and failing that, attempted to swim across to retrieve a canoe:

...the congressional medal of honor has been awarded to you for most distinguished gallantry in action at San Mateo, Philippine islands, December 19, 1899, while a sergeant, Company M, Twentyseventh United States volunteer infantry, the following being a statement of the particular service rendered: "On this occasion Sergeant Edward F. Gibson attempted, under a heavy fire of the enemy, to swim a river for the purpose of obtaining and returning with a canoe." 1

The Gibsons are buried in the Golden Gate National Cemetery in San Bruno, CA.