Edward M. Shands was a much respected African American Oakland educator who worked for many years throughout the 1960's and 1970's as the principal of the Oakland Adult Day School, located at 2455 Church Street.  The school was later renamed in his honor, the Edward Shands Adult School.

Due to City and State budget cuts, the popular school is now closed, which is a tremendous loss to the Oakland community.

In March 2012 the Oakland Unified School District board voted to use the closed Edward Shands Adult School at the site for charter school Arise High School. 1

Checking in on March 30, 2013, the Edward Shands Adult School does not appear to be in use for any educational purposes, what with the fence around the buildings and garbage everywhere,  What a waste of a once valuable neighborhood resource that lifted many adults out of poverty and unemployment. 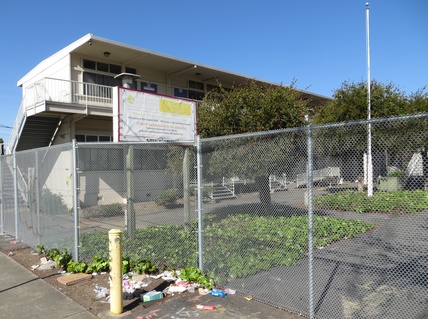