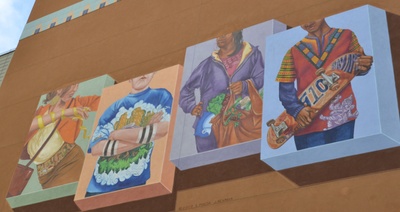 photo CC BY-NC-ND 2.0 by William Newton
Information about these murals here. The Fox Courts Murals were painted in 2002 by Eduardo Pineda and Joaquin Newman. They are on the side of the Fox Courts affordable housing complex and were painted along with the Oakland School for the Arts.

These four people, on 19th Street side, are dancing, shopping, thinking and pausing. According to @forrealism, "their cloths contain ancient motifs, a nod to indigenous roots and newer traditions that compose the East Bay cultural fabric. Look for Mixtec glyphs from Central America, Ohlone arm-bands from Bay Area Native Americans, Móche fish and plants from Peru, and a Hindu deity from India. Together the six figures express the cultural fusion of the Oakland community and the vitality of the Uptown community, with its performing arts legacy, youth culture, and environmental awareness."

Need a picture of the other set of murals- saxophone player in an Oakland Larks jersey, woman holding an Oakland tree (representing environmental awareness and civic engagement). 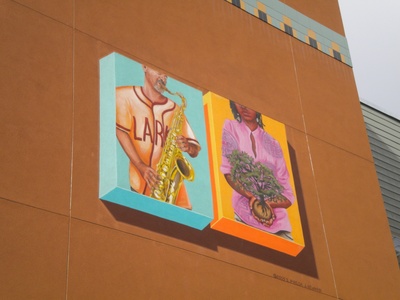