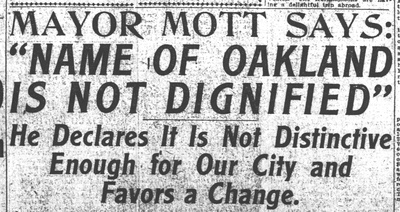 While all mayors get quoted in the newspaper from time to time, mayor Frank K. Mott seems to have had more than his share of "Mayor Mott Says..." in the headlines. The one that inspired this page is Mayor Mott Says: "Name of Oakland Is Not Dignified" 1 in 1907, which understandably riled some people up then and now. The Oakland Tribune had a particularly snarky reply. 2

The only 'rule' for inclusion is the headline or article should have "Mayor Mott Says" in it somewhere.