The "Grateful Dead House" as it was known around the Piedmont Pines area of Montclair,  because the home was rented in the late sixties by Owsley Stanley, the first soundman for The Grateful Dead The house is located at 6024 Ascot Drive. 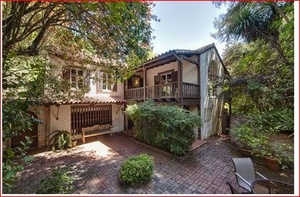 Sometime during the late sixties, the house was rented by Owsley "Bear" Stanley, was an American audio engineer and chemist.   Under the professional name, "Bear", he was the first  soundman for the rock band Grateful Dead who he met in 1965.   Apparently the band partied pretty hard in this during the time that Stanley occupied the house in Montclair.

Stanley is also known for being the first private individual to produce mass quantities of LSD. By his own account, between 1965 and 1967, Stanley produced no less than 500 grams of LSD, amounting to a little more than ten million doses.

Along with his close friend Bob Thomas,  Stanley also designed the Lightning Bolt Skull Logo . Which is the circle divided in half by a lighting bolt as seen below.

Stanley died March 12, 2011, at the age of 76   He died in a car accident that occurred near his home, on a rural stretch of highway near Mareeba, Queensland, Australia.  His ashes were placed on the soundboard at the Grateful Dead  50th anniversary shows  in Chicago, on July 3–5, 2015.

The house on was sold in 2012 for $1.2 million dollars.   A September 2012 article, "Rest Your Head Where the Grateful Dead Once Partied" was posted on the  Curbed San Francisco website.