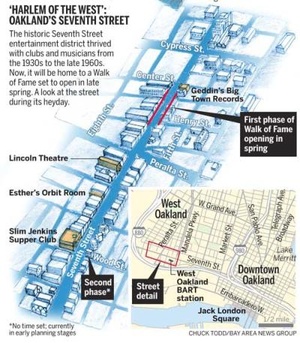 'Harlem of the West' on 7th Street, Oakland, California 1Did you know that West Oakland was once considered the Harlem of the West? Raincoat Jones, a former bootlegger who became a loan shark, helped fund what would become a series of night clubs in the 7th street area near current-day Mandela Marketplace and the West Oakland BART station. The area gained fame in the 1940s as THE West Coast center of blues music. WWII really helped popularize the scene: military people from all over learned about 7th street and became a regular crowd. Billie Holiday, Aretha Franklin, Big Mama Thornton, T-Bone Walker and Al Green all performed the scene (Al Green actually had his first West Coast appearance here in the 1960s).

T-Bone WalkerThis boom paved the way for black-owned businesses such as a bank and a pharmacy. But in the 1950s (I think?), homes were razed for a postal distribution center, and the freeways built during this time isolated neighborhood. “The depot at the western terminus of the First Transcontinental Railroad, which had brought a steady flow of cash-flush black porters to West Oakland and sent them back to the South with fresh-cut records, was shuttered”. (LA Times, "The blues return to Oakland’s 7th Street" Dec. 7, 2011) The 1960s construction of BART was the final straw: the music scene could not compete with the screeching of trains. Esther’s Orbit Room was the last of the music clubs to be padlocked (2011).

In 1990, Ronnie Stewart founded the Bay Area Blues Society as a way to connect West Oakland with its musical past. 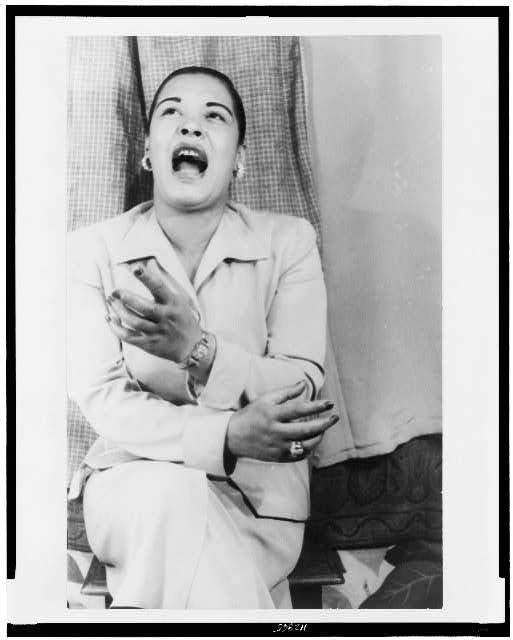 For reals? In 2006, Professor Paul Grabowicz of UC Berkeley had his students create a video game digital preservation of the 7th street jazz and blues scene. Learn about it here.