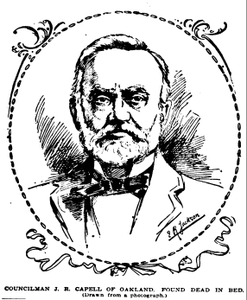 Capell2James Capell was born in Virginia, moved to Alabama when he was about 10 and came to California in 1849 for gold. Prior to coming, he fought in the Mexican war. During the trip west, his party ran out of food and they ended up eating one of their mules.

Capell was one of the founders of the Home Security and Loan Building Association.

He was apparently laughing and joking at the City Council meeting the evening before his desk, even joking about his age with William Heitmann.3

Capell was one of the City Council Members arrested in 1895.