On February 12, 1895, all of the members of the City Council were arrested by Officer Nick Williams at the order of Colonel John Irish who appeared to have a personal beef against the Council.

In 1894 there was a typhoid outbreak in a West Oakland marsh near 22nd and Peralta known as the "front door" of the city and Colonel Irish alleged that the Council was not being kept up properly. Colonel Irish wanted a park built there that would greet visitors entering Oakland on the train, but the marsh had become a dumping ground. He arrested the councilmembers as the responsible parties. The following men were arrested: John Towle, W. F. Barnard, J. R. Capell, Richard. B. Snell, Charles Knox Marshall, Walter Manuel, William Heitmann, William Watkinson and William Dow.1 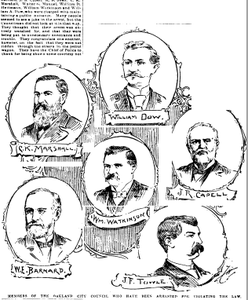 The arrested menThe Chief of Police kindly did not jail the men and allowed them to be released on their own recognizance.

Later that month, the councilmen, represented by W.R. Davis admitted in trial that they had allowed the dumping to proceed. Davis argued that the council could not be held accountable for this legislative action unless they had done so maliciously or corruptly, which they had not. The defense also argued, strangely, that if anything, the council had acted in violation of state law because they had no authority to make the resolution. The prosecutor argued that the whole body could not be held accountable but that individual members could be. The judge sided with the councilmen and nothing came of the whole affair, leaving Colonel Irish frustrated and with no one to blame.4

Colonel Irish was a bit of a troublemaker: He also attacked Mayor Pardee over what appeared to be nothing. Pardee responded that Irish was, according to the San Francisco Chronicle, a "blackguard and a coward."2 He was also reported to be near to blows with the president of the Oakland Water Company, W. J. Dingee, after issuing fighting words about the company.3 It appears that Colonel Irish may have been busy finding fault at every turn.