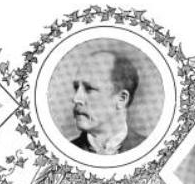 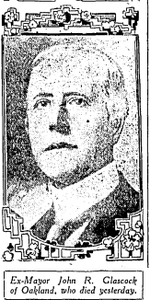 Glasock was born in Panola County, Mississippi and moved to San Francisco with his parents.5

Glasgock was Alameda County district attorney from 1875 to 1877. He served as U.S. Representative from California at-large from 1883–1885. At the time, two of California's six representatives were elected at-large. 4 Glascock was a Democrat. He was elected Mayor in 1889 on the Citizens' ticket and there was serious betting on the outcome of the election- Glascock was favored to win.11 No one expected him to win with more than 1000 votes over his opponent, so when he won by 3017 votes over his opponent ?? Ames, it was a big deal.16

In 1895, the governor appointed Glascock as a trustee of the Industrial Home for the Adult Blind. He served as Director at least in 1898.9

In 1902, he was a Democratic nominee for Superior Court Judge in Alameda County.

In 1910, Glascock appeared before City Council and asked Council not to pave streets.8

John was a Freemason, a member and past master of Live Oak Lodge No. 61, and a member of the Royal Arch Masons of California. He was chairman of the executive committee of the Good Government Club in 1896.10 He was a founding trustee of the First Independent Presbyterian Church in 1869.12 He was a member of the Athenian Club for awhile.15

Glascock died at his country home in Woodside, California and is buried in Mountain View Cemetery.7 He was survived by a widow and a son, John R Glascock, Jr. He died due to heart problems and asthma.14