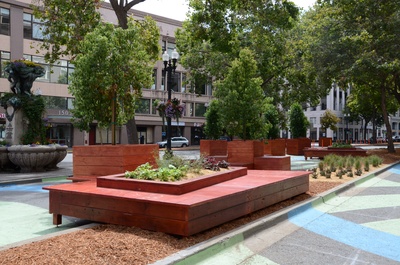 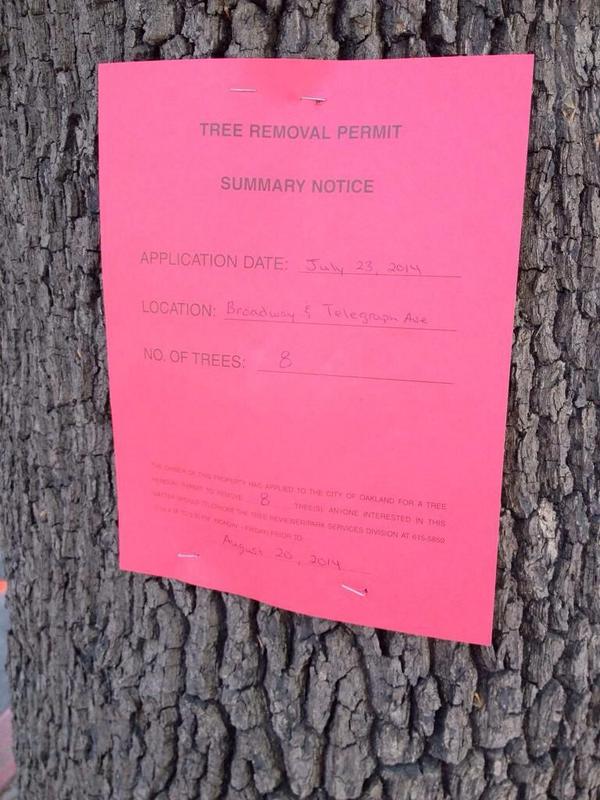 Update: "A Tree Removal Permit Application was filed on July 23, 2014 for eight trees that will be removed and replaced by 13 trees. Six trees in the median require removal to accommodate the proposed street realignment of Broadway and Telegraph Avenue. Two trees require removal to accommodate the proposed pedestrian pathways of the expanded plaza." (city) "@Oakland is planning to chop down 8 beautiful, mature trees in Latham Square as part its new car-centric plan" (tweet) "If you have an opinion on the trees in Latham Square being cut down, call Oakland's "Tree Reviewer" at 510-615-5850, M-F, 9A-5P." (tweet)

Update: Following the project go-ahead by Oakland City Council at its meeting on Tuesday, January 7, the City is seeking public input on design elements for Latham Square including: Lighting, Landscaping, Hardscaping/Surface Materials, Seating/Furniture, Programming, Signage and Historic Fountain Reuse. On Thursday, January 30, the City of Oakland will host a community meeting to gather input on design elements for Latham Square. The meeting will be held at the AIA East Bay offices at 1405 Clay Street from 6 to 8 p.m.  Public input from this meeting, along with input from previous community meetings and policy set by City Council, will guide the final design. A follow-up community meeting will be held after engineering analysis and detailed design to present the final design drawings prior to constructing the new Latham Square. For more information, including previous presentations and notes on public input gathered, please visit www.oaklandnet.com/LathamSquare

The Latham Square Project is currently in a period of transition? Hiatus? Disintegration? If you understand what's going on, please edit this page! (Click edit next to the title!)

A video of the rules committee meeting where the Latham Square Plaza was discussed on December 19, 2013.

UPDATE: While this pilot was supposed to be six months, after six weeks, cars are being let back through. See article.

UPDATE: There is another Community Workshop coming up about the Square onNovember 20, 2013 atOakland City Hall - Hearing Room 2 from 6:00pm - 8:00pm. Oakland says they "wants your input on a permanent design for Latham Square." Let them know how you feel about the cars!

(And look at how nice it is! People even hang out there during the day! It is nice!)

UPDATE: give your feedback! The city is requesting resident feedback about the Latham Square Pilot Project. Take the public feedback survey. Additionally, the city's page for the project says: "The City is holding a Community Presentation/Workshop on Saturday, September 14, 2013, 10am-Noon (download flyer). The meeting will be held at Latham Square (intersection of Broadway and Telegraph) and possibly moved inside the first floor of the Cathedral Building (1615 Broadway). Please come to provide your input and have your voice heard." 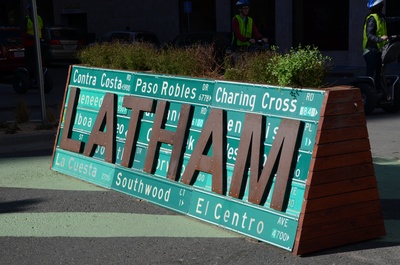 Latham Square sign
photo CC SA-NC-BY from Our OaklandConstruction on the Latham Square Pilot Project began on July 22, 2013. The project turned Telegraph Avenue between 16th Street and Broadway into a pedestrian-only plaza. Southbound traffic on Telegraph is now required to turn right onto 16th Street, and drivers traveling north on Broadway must turn left at 19th Street to get to northbound Telegraph (or 16th Street) rather than turning left directly onto Telegraph.

According to the City Administrator's newsletter, "[t]he City of Oakland worked closely with local stakeholders on the plaza design and traffic circulation through more than 25 individual meetings with local businesses, property owners, residents and other stakeholders; public presentations to the Oakland Metropolitan Chamber of Commerce and Oakland Bicycle & Pedestrian Advisory Committee; and a four-hour community design workshop in February 2013 that attracted more than 100 participants. The pilot project will build on Latham Square’s significance as a gateway to the vibrant Uptown neighborhood by creating an enhanced pedestrian space through a low-cost trial that enhances the pedestrian environment, increases economic development potential, saves existing trees and improves private automobile and transit operations. The pilot pedestrian plaza will remain in place until at least October 2013 at which time staff will bring a report to City Council on the plaza’s success and a recommendation on whether a permanent pedestrian plaza should be created. Throughout the pilot period, City staff will be taking citizen input, analyzing the plaza and traffic flow and making adjustments as needed to respond to concerns."

On Friday August 16th, there was a "soft opening" of the Pedestrian Plaza at noon. There will be a larger "grand opening" in September. 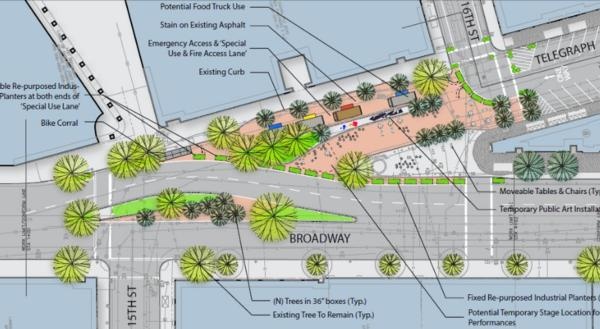 On April 23, 2013, the Public Works Committee of the City Council considered the Latham Square Pilot Project (LSPP) which aims to turn Latham Square in downtown Oakland into a temporary pedestrian plaza. The text of the agenda reads:
From: Public Works Agency Recommendation: Adopt A Resolution Authorizing The City Administrator Or Designee To 1) Implement The Latham Square Pilot Project (LSPP) To Temporarily Close Telegraph Avenue Between 16th Street And Broadway For The Purposes Of Creating A Pedestrian Plaza For At Least Six (6) Months Following An Opening Date In Summer 2013; And 2) Report Back To City Council In The Fall Of 2013 As To The Success Of The Pilot Plaza.

City Council approved the project on May 7th. To view the staff report, resolution and a video of this meeting, please visit http://bit.ly/139YJ9R. 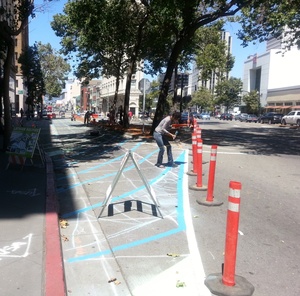 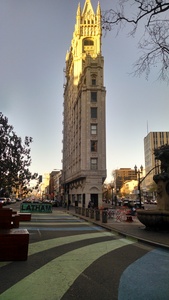