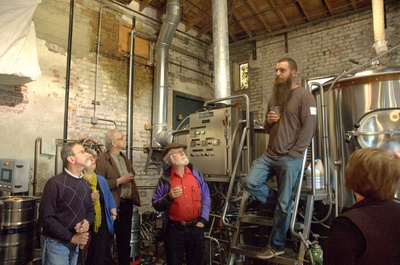 Linden Street Brewery (LSB) is a production brewery in West Oakland. They also have a taproom open on weekends where beer can be purchased for consumption, and frequently host food trucks and other food vendors.

Oakland and Brooklyn were once home to many breweries, producing huge amounts of beer, but they are no more. While there have been brewpubs (i.e., beer brewed on the premises for consumption on the premises) such as Pacific Coast Brewing Company, LSB is the first production brewery (i.e., beer produced for other establishments) in Oakland since the last one, Golden West Brewery, shut down in the 1959.

LSB was started in 2009 by Adam Lamoreaux, and initially faced many challenges opening the brewery because there was no one with the city of Oakland that had ever dealt with one. The brewery finally opened in 2009. The brewery has expanded production every year since opening, and even served as an 'incubator' for the production of the Dying Vines beers (which are now produced and distributed by LSB.)

LSB is known for session beers (i.e. that you can drink for a long session without getting too drunk) that are lower in alcohol than many craft beers today. They are brewed in the historic 'steam' style that early European settlers developed, a style best known because Anchor Steam Beer. It uses lager yeasts but at a higher temperature. Normally lager yeasts ferment in cooler temperatures (think European basement or a handy cave), but early settlers adapted to the warmer temperatures here in the Bay Area. LSB's four flagship beers are: Urban Peoples' Common Lager, Burning Oak Black Lager, New Oakland Glow Pilsner, Ol' Brick ESB, and Hop Candi Session IPA. During the summer months they produce a beer called the 'Town Lager, a light, easy-drinking beer, which might best be described as a "lawnmower beer". The Town Lager is only delivered by bicycle, so there are limited places where you can sample it.

The brewery and taproom are housed in a historic brick building on Linden Street (their ESB is named after the building). It was originally used for production of cables/wires, and the framework for the water tower and the wellhead are were visible in the original taproom. There is now a wine-tasting room called Campovida in part of the building, and The Dock at Linden Street, a restaurant collaboration with James Syhabout.

LSB is a big supporter of Oakland, and frequently donate beer to Oakland non-profits for different events, as well as hosting events for non-profits at the taproom.

Linden Street Brewery was the recipient of the East Bay Express Best Brewery Readers' Poll Award in 2014 and 2015. 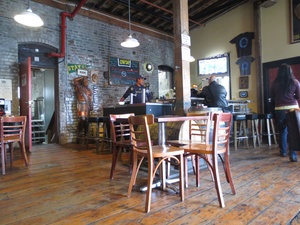