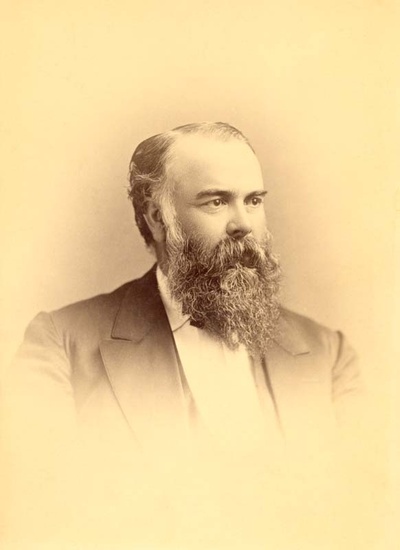 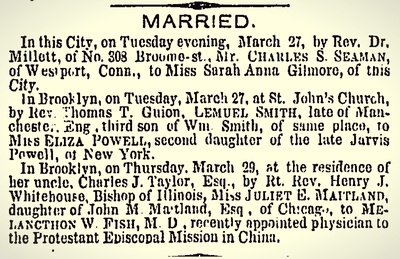 Announcement of wedding between Dr Melancthon W Fish and his first wife Juliet Maitland appeared in the New York Times on Mar 31, 1855. 6 Melancthon W Fish, M.D. was born in New York and was a Physician who served in a number of government posts overseas before returning to serve as a doctor for the Union in the American Civil War.

In 1837, his father moved the family to Michigan. He graduated from Wesleyan Seminary in Albion. In 1854, he graduated in medicine from Rush Medical College in Chicago.

Records show he left New York around April 5, 1855 and arrived in Shanghai, China by boat with his first wife on the 3rd of August 1855 as a Medical Missionary for the Protestant Episcopal Church's Foreign Missions in Shanghai 12 and would serve with them until around January 1, 1856 when he would leave to accept the office of Vice-Consul of the US to Shanghai.

Dr. Melancthon Fish's first wife was Juliet E. Maitland. 6 The couple traveled the world before settling in Shanghai, China. Between his time serving as Medical Missionary and the period of time following when he took the office of the US Vice-Consul in Shanghai, he& and his wife Juliet would make Shanghai their home for about 6 years. During that time, Juliet became pregnant and died due to complications of childbirth around 1859. The baby girl she gave birth to survived and was named "Juliet", after her mother.

The same year, Juliet's sister Emily August Maitland left her home in Albion, Michigan for Shanghai, China. She was a teenager, around the age of 16 and cared for her sister’s baby. Emily would marry her widowed brother-in-law Melancthon when she was just seventeen, and would become mother to her sister’s baby Juliet. (Emily and the daughter Juliet are notable Oakland residents, in their own right.)

The whole family returned to the United States in 1862 so that Dr. Fish could enlist in the Union Army.

With the 16th Army Corps, Dr. Fish would see action at Vicksburg and Sherman's March to the Sea. He joined as a Surgeon and was Commissioned an officer in Company S, Missouri 11th Infantry Regiment. He mustered out on May 2, 1865.15 (Lots of info about his civil war service available here.)

Following the War, he was transferred to Benicia, California to serve at the Army Arsenal. Liking the area, he and his wife Emily decided to settle across the Bay - in Oakland - where he established a private practice. Dr. Fish and his family lived at 461 East 14th St. 10

He also taught at both UC Berkeley and Cooper College in San Francisco Upon his resignation as Medical Inspector of the Army Corps, he accepted an appointment from The University of California as a Professor of Physiology and Microscopy in the Medical Department, located at the time in a newly established building at 3rd and Parnassus in San Francisco. 3 (You can see artifacts from his teaching days here.) He is also listed as the attending physician at Mills Seminary (presently known as Mills College.)

Adding to his service in the political arena, Fish was also involved with local politics as a resident of Oakland. He served on the Oakland City Council (1877-1878) and later on the Oakland Board of Education. 4 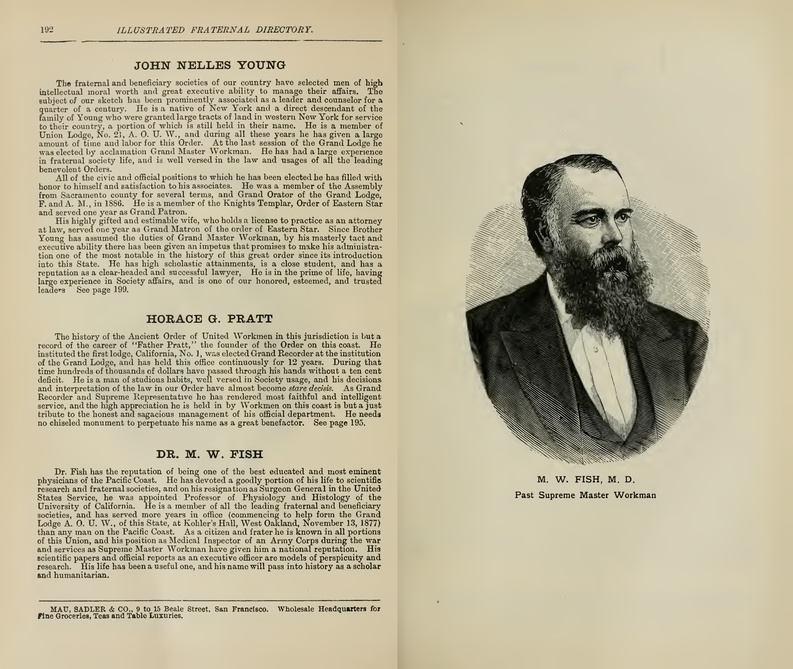 His membership in various fraternal societies included: The Ancient Order of United Workmen (A.O.U.W.); The Military Order of the Loyal Legion of the United States (M.O.L.L.U.S.);  General George H. Thomas Post, No. 2 Grand Army of the Republic; Independent Order of Odd Fellows, Orion Lodge, No. 189, Recording Secretary; Knights of Pythias; Knights of Honor, American Legion; Alameda County Medical Association, President (c 1876)10 He had also been an active member in the Champions of the Red Cross and Order of Chosen Friends.

He helped form the Grand Lodge A.0.U.W. of California, at Kohler's Hall, West Oakland, November 13, 18779 and was its first Past Grand Master Workman, and a few years later elected Supreme Master Workman of the order.

Dr. Fish died in 1891. Despite the rain on the day of his funeral, accounts of it described a large, heartfelt crowd:

After his death, his widowed wife Emily and their daughter Juliet would both become well-known for their service as lighthouse keepers on the coast of California. Emily served her appointment at Point Pinos Lighthouse (California’s oldest operational lighthouse) from 1893 until her retirement in 1914. Their daughter Juliet followed in her mother’s footsteps when she was widowed and became keeper of San Francisco Bay’s Angel Island Light and Fog Signal Station at Fort Knox in 1902. 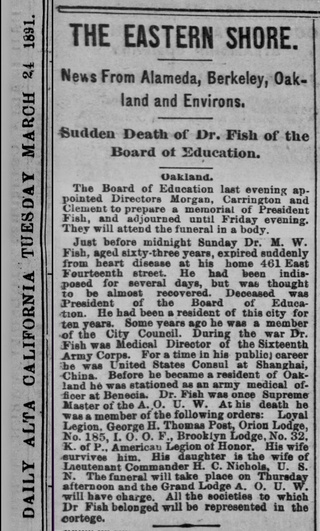 Dr. Fish is buried in Oakland's Mountain View Cemetery. 5  His grave is located in the Fish - Nichols Family Lot (Plot 33, Lot 18), alongside the following family members14: 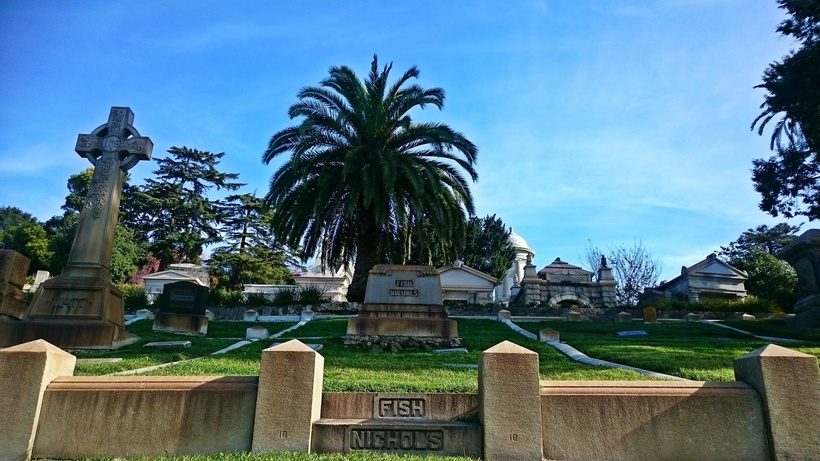 1. “TWEEDISM IN OAKLAND: The Influence of the Recent Scandal on Politics.” San Francisco Chronicle: March 1, 1879.

7.  Portrait of Dr. Fish. The original of this image is part of the Stanford University Medical Center Records (MSS 101) at the Stanford Medical History Center. Digital copy available via Stanford's Flickr account: https://www.flickr.com/photos/[email protected]/5030390529 (Available for Non-Commercial Use under the Creative Commons License: https://creativecommons.org/licenses/by-nc-sa/4.0/ Some rights reserved by Stanford Medical History Center.)

12. "Letter from Dr. M. W. Fish The Voyage - Reception by the Bishop - First Sunday in Shanghai - Plan for a Dispensary. Shanghai, August 31, 1855."  The Spirit of Missions; Vol. 21, For MDCCCLVI. Edited for The Board of Missions of The Protestant Episcopal Church In the United States of America, By the Secretaries and General Agents of the Two Committees.  New York: Published by the Board of Missions, By Daniel Dana Jr., 381 Broadway. 1856. Pg 33-34.

14. Photo of the Fish - Nichols Family Lot in Oakland's  Mountain View Cemetery. Photo taken by and shared with permission from a 4th great-niece of Dr. Fish.