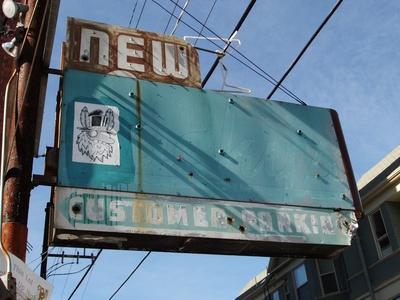 New Lucky's, or Burnett's New Lucky's, was a cocktail bar at 2268 Telegraph Avenue. There is little evidence remaining of the bar from Telegraph. The building is now occupied by Kingston 11 Restaurant and Bar, with an address of 2270 Telegraph Avenue. The building was subdivided at some point after its New Lucky's days and was most recently used for two separate businesses, although Kingston 11 now occupies both halves. However, a sign marking the parking lot for New Lucky's is still standing on 23rd Street behind the McMann Apartments. Until c.2013, there was also a very faint sign painted on the back of the building next door, but that has since been painted over as part of the Free Pussy Riot mural.

An ashtray from back in the day lists the address as 2268. Another lists the phone number as HI4-5708 (Highgate=44), and the address as 2230. Given that 2230 Telegraph is now the site of the gas station at the corner of Grand Avenue, you would think that the restaurant moved at some point. Actually, the addresses appeared to have changed, probably because what is now called West Grand between Telegraph and MLK was then known as 22nd Street, and the current 22nd Street between those streets was known as Jones Street. The 1912-1951 Sanborn map for the area shows what is now known as 2268 Telegraph was then identified as 2230 Telegraph.

The 'new' part was because they started in 1938 on Broadway, but moved to Telegraph in 1948 and changed their name to "Burnett's New Lucky's Restaurant".Ads from the Tribune show that the bar had an address of 2230 Telegraph Avenue in 1950, but the address was 2268 Telegraph Avenue by 1960, and the restaurant was still open in 1970. A commenter on Our Oakland said her grandmother worked there as a waitress, and her boss' name was Ruby, which must have been Ruby Burnett. Another commenter says they remember eating there in the 80s. A commenter on Facebook worked there in the early 80s, and said Ruby retired in 1983. 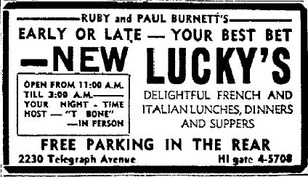 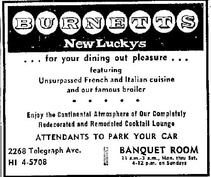 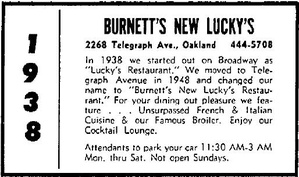 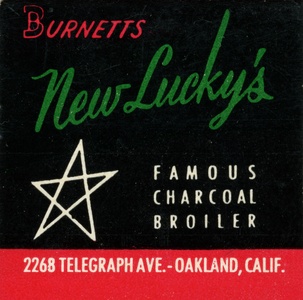 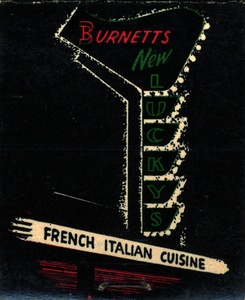 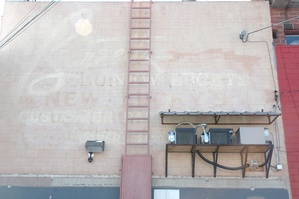 faded sign, prior to being covered by FPR Mural
photo from Our Oakland