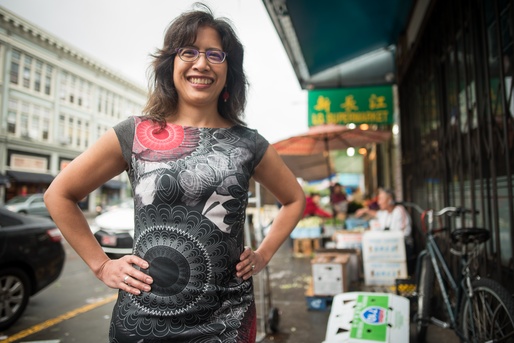 Nikki Fortunato Bas is the Oakland City Council member for District 2, and Council President for 2021-2023. Her previous work as Executive Director of the East Bay Alliance for a Sustainable Economy was featured in the San Francisco Chronicle and the East Bay Express gave her their sole endorsement, stating: "We think the former nonprofit leader is one of the smartest and impressive council candidates in this election. We also think she'll be stronger than [the incumbent] in pushing for tenant protections and tougher rent control in Oakland if Proposition 10 passes and will be a powerful advocate for affordable housing." The Women's Media Alliance reports "Nikki has over 25 years of experience in the social justice movement. She is a nationally recognized expert on worker rights and economic development issues." According to her campaign website, http://Nikki4Oakland.com, she has lived in District 2 for 20 years where she raised her family and was instrumental in the passage of several Oakland policies:

East Bay ExpressThe Express' 2018 Endorsement Guide. "We think the former nonprofit leader is one of the smartest and impressive council candidates in this election. We also think she'll be stronger than Guillen in pushing for tenant protections and tougher rent control in Oakland if Proposition 10 passes and will be a powerful advocate for affordable housing."

East Bay Express Taking Sides in Oakland Council District 2. "Bas believes that developers and other business interests can afford to give more to the city's residents in terms of affordable housing, good jobs, and other community benefits, and she thinks the district wants someone who will push harder.""I think people are hungry for someone to really represent them on council — and in this district," she said."

VOX Publica Progressive in Oakland? These Are The Candidates You Should Support in 2018. "She [Nikki Fortunato Bas] has the right progressive values, a lot of experience working with Oakland city government and the right combination of even-temper and passion to get along with Council colleagues while advocating for sound and humane policies."

SFGATE Community Members Gather To Paint Mural Near Homeless Camp.  "Former KPIX anchor Dana King donated the space, an exterior wall measuring 70 feet by 20 feet, of the building she owns at East 12th Street and 13th Avenue. "Oakland is in the midst of an economic renaissance, but so many are being left behind," said King, who is a sculptor and rents the building as live-work space to five other artists at below-market-rate rents."

KTVU2 Camping could be banned along Lake Merritt, replaced with Tuff sheds. “The plan is to build the sheds at the Henry Kaiser Convention lot. It will include 20 cabins to house 40 people. Nikki Fortunato Bas - who is running for District 2 City Council - wonders, where will everyone else go? 'That means that the 100 people who are living in tents around the lake are going to be evicted,” said Bas. “And unfortunately there aren't enough shelters options or other places for them to go so we believe that is an inhumane action.'"

Drake Talk Oakland Towards a New City Council in Turbulent Times. "As Jessamyn Sabbag of Oakland Rising and a former Guillen supporter says, 'Nikki has a proven track record – in fact, she’s accomplished more as a civilian in the last four years than Guillen has as an elected official.'"

San Francisco Chronicle Nikki Fortunato Bas, EBASE. Profile of Bas including her work to create living wage jobs in Oakland. "What we do is build coalitions to create good jobs and healthy communities, knowing that good jobs are fundamental to people to live and work here with dignity."

KRON4 Community rallies in Oakland after BBQ controversy "'This wasn't an isolated incident of a white person calling the police on a black person. There's a pattern that's been happening all across the country,' said Nikki Fortunato Bas, who is running for City Council District 2."

Bay Area Reporter Kaplan sees path for progressive in Oakland mayor's race "In District 2, Councilman Abel Guillen, who identifies as two spirit, is seeking re-election. He is being challenged by Nikki Fortunato Bas, a community organizer."

East Bay Citizen Kenzie Smith, target of BBQ Becky, is running for Abel Guillén’s council seat "Bas Fortunato [sic] made her own splash earlier by raising $43,000 through the first two months of her campaign last year, a total that suggests Guillén’s re-election could be vulnerable."

The Intercept These Wall Street companies are ready to cash in on Trump's border wall “'Lacking from the public narrative is that corporate billionaires stand to gain the most financially,' Nikki Fortunato Bas, executive director of Partnership for Working Families, told The Intercept."

The Washington Post The topic of sexual assault is now at center stage in the 2016 campaign "'Personally, it’s been really challenging to have our country talking about an issue that touches me so deeply and personally,' said Nikki Fortunato Bas, who attended a rally of sexual assault survivors at Trump Tower in New York on Tuesday. The events of the past few weeks have been a breaking point, she said, that led her to publicly say she had been assaulted."

The Atlantic How St. Louis Workers Won and Then Lost a Minimum-Wage Hike “Preemption is portrayed as a struggle between political parties, but state interference in city minimum wage laws stems from a larger Jim Crow legacy of blocking economic policies that primarily benefit communities of color,” said Nikki Fortunato Bas, the executive director of PWF.

Seattle Times As cities ready HQ2 bids, Amazon should plan civic investments too, community groups say “We wanted to make sure we drove home the point that communities want to be at the table,” said Nikki Fortunato Bas, executive director of the Partnership for Working Families, which helped coordinate the letter. “We want to make sure that this second headquarters benefits our community in many ways.”

PGH City Paper Advocates say Amazon HQ2 would not fit with Pittsburgh’s vision of equitable development "Attendees at this year’s conference include Julian Castro, a Housing and Urban Development secretary under President Barack Obama, and Nikki Fortunato Bas, the director of the nationwide economic-justice organization Partnership for Working Families."

NEXTpittsburgh Notes on p4 2018: provocative talks and solid research about Pittsburgh’s future "Nikki Fortunato Bas, executive director of Partnership for Working Families, spoke about building grassroots power in cities. When Google expanded its headquarters in San Jose, for example, her group and another local organization asked the company and the city to partner with them to fight the displacement that Google’s high-paying jobs can cause. They also asked Google to hire local contractors, support local schools with career opportunities, broaden access to transit, and provide oversight of community benefits. 'Our affiliate Working Partnerships USA and Silicon Valley Rising are calling on Google to ensure that families can thrive as the company expands on a prime piece of public land to build a new 20,000 employee mega-campus.'”

East Bay Express Opinion: Prioritizing People in Our Housing Policies. By Nikki Fortunato Bas. "Oakland is in a development boom that could help us thrive or bury us. Profitable corporations and developers must contribute their fair share for the Oakland infrastructure they use to do business, including affordable housing for their multi-income workforce."

East Bay Express This is how we win: Growing our power in cities. By Nikki Fortunato Bas. "Our opportunity to push back starts at the local level, where we can grow a base of organized people, build long-term power, and pass policies that level the playing field and protect the lives and well-being of our residents."

The Hill Potholes in the plans to rebuild America By Nikki Fortunato Bas. "As we look to expand our telecommunications, water, transportation and power systems, we will be faced with an important choice. We can create good jobs and smart, green infrastructure projects that reach those that need them the most or we can simply syphon taxpayer money to big companies with no regard for accountability to the community."

Huffington PostBringing Paris Home - Recommitting to Solving the Climate Crises By Nikki Fortunato Bas. "[I]t is critical that we do not rely solely on international and national action, but instead create local climate solutions to decrease carbon emissions, improve climate resiliency and move towards a just transition."

MediumTransit Equity Could Transform our Communities - Let's Not Wait Any Longer, By Nikki Fortunato Bas. "[T]he fight for justice in our transportation systems is about working people riding green public transportation that gets them home in time to have dinner with their families."

Colorlines No, The Anti-Immigrant Border Wall Isn't the Infrastructure Project Americans Voted For By Cristina Jimenez and Nikki Fortunato Bas. "[Trump] is committed to the expansion of detention centers, even though we already have the largest immigrant detention system in the world. His plans will neither modernize nor repair our towns and cities, but instead increase the criminalization of countless immigrants and people of color."

Huffington Post Bubble Up Economics & How History Will Remember the Fight for $15 By Nikki Fortunato Bas. "Millions of working people - our neighbors, our coworkers, and our friends - made historic gains as New York and California moved toward a $15 minimum wage. We are fighting from the ground up - from city - to state - to hopefully the nation - for something so simple: to be able to put food on the table once again."

The Hill States push Jim Crow when they override minimum wage laws By Nikki Fortunato Bas. "Today, African Americans are paid 75 cents per every dollar a white worker is paid. So why does this inequity persist generation after generation? Interference by state governments is the latest iteration of the Jim Crow legacy, an era in which black workers earned as little as 50 percent of what white workers earned."

East Bay Express Port of Oakland Jobs Deal Should Be a Model for Amazon and Other Warehousing Corporations If Amazon comes to the Bay Area, its profits should enrich everyone who contributes to the enterprise — including construction, service, and warehouse workers. By Jahmese Myres and Nikki Fortunato Bas.

*titles and organizations for identification purposes only