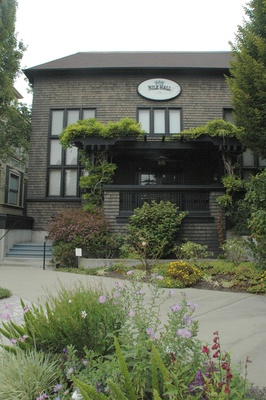 Nile Hall is currently located in Oakland’s Preservation Park and was the former home of the Nile Club, a theater venue for wealthy East Bay gentlemen in the earlier part of the last century. Not long after the hall opened, the Nile Club merged with the Athenian Club to become the Athenian-Nile Club.

Famed architect Charles Dickey designed the magnificent Arts and Crafts 200-seat theater building in 1911 for the owners of the Bohemian Club. With square pillars flanking the stage, windowed walls and 30' ceilings, the structure was an impressive venue for theatricals and music hall-type productions which were put on in the newly erected Nile Hall for an exclusively male audience. 1

But just four years after opening, the Knights of Columbus purchased the building in 1915. During World War II, Nile Hall served the fighting men and women seeking respite from battle as a USO Allied Officer’s club.

The Oakland Ensemble Theatre, an African American theatre group, performed productions such as Maya Angelou’s I Know Why the Caged Bird Sings during the 1960s.

Today the theater stands amidst beautifully maintained gardens and is available to rent for special occasions. For rental information, interested parties can contact the Facilities & Event Coordinator at (510) 874-7580 or via email at [email protected].