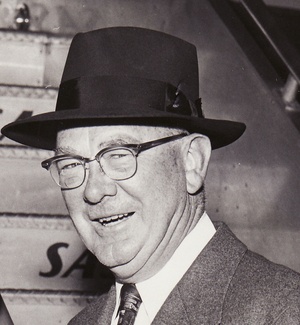 Born in Oakland to Dr. O. D. Hamlin and Elizabeth C. MacMahon, Hamlin, Jr. attended Oakland High School, then went on to earn his B.L. degree at the University of California in 1914.

Hamlin, Jr. was the Alameda County Deputy District Attorney from 1915 to 1920, His successor as Deputy DA was Earl Warren, a lifelong friend. He then went into private practice with Donahue, Hynes and Hamlin from 1920 to 1938 in Oakland. From 1938 to 1947 he was with the firm of Donahue, Richards and Hamlin.

President Eisenhower appointed Hamlin, Jr. United States District Court judge of the Northern District of California in 1953. In 1958 Eisenhower elevated Hamlin to a seat on the United States Court of Appeals for the Ninth Circuit

His father resided at 291 Lenox Avenue, Oakland where Ollie Jr. was raised. Ollie Hamlin Jr. built a house in Lafayette in 1941 on land his grandfather purchased in the mid 1800's. . He sold the house and moved to Piedmont in 1972. His first wife Elizabeth died and in 1955 he then married Gertrude (Cole) Jackson, a long time family friend whose husband Frank Jackson died.