The original building was constructed in 1907 for the Fruitvale Volunteer Fire Department. It was used for meetings and storage after the new building was opened in 1951, and torn down in 1956. 1

There were plans for the city to sell the building, and discussions of turning it into a restaurant run by Cosecha in 2017. 2 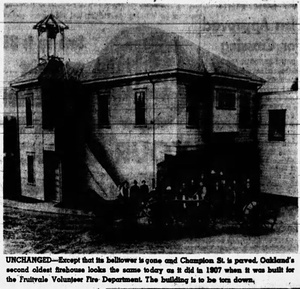