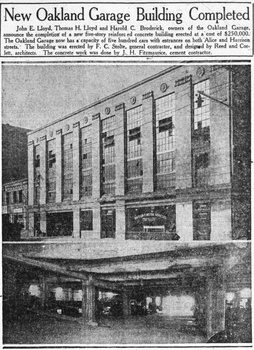 The Oakland Garage Building at 1439-1443 Alice St. was constructed in 1927 for John E. Lloyd, Thomas H. Lloyd, and Harold Broderick. It was designed by Reed and Corlett. 1

When constructed, it also provided a space for the Oakland branch of the state Department of Vehicles, although the office moved to the Tribune Tower in mid-1929. 2 During the 1940s, the office space was used by Safeway Store's Personnel Office. 3