The Ohlone people are the Native American people who lived in the area now known as Oakland (and the whole Bay Area) before Spanish colonization.

Ethnographers have classified Ohlone on the basis of the language the members of the tribal group spoke. They are part of the wider Costonoan language stock.

The contemporary revival of one of the languages, Chochenyo, is detailed in this SF Chronicle article from November 2012. The subject of the article, Vincent Medina, has a tumblr feed detailing his experience of Being Ohlone in the 21st Century here.

In terms of modern geographical boundaries, the Costonoan-speaking area in Alameda County is bounded on the south by a line running east-west between Oakland and San Leandro; on the east by Walnut Creek, on the north by San Pablo Bay, and on the west by San Francisco Bay,

According to the ethnographer, Robert F. Heizer, "During the whole of the Spanish - Mexican Period of California history, from 1542 to 1850, no person attempted to write a general ethnographic sketch of the California Indians who were known, or to place the names and locations of known tribal groups on a map of the territory."1

However, there are accounts of contact with indigenous populations in the expedition journals of early Spanish explorers Fages (1772) and Anza (1776). The Fages-Crespi expedition found villages on the many creeks running down from the Oakland Hills, and the Anza-Font expedition, likewise.2 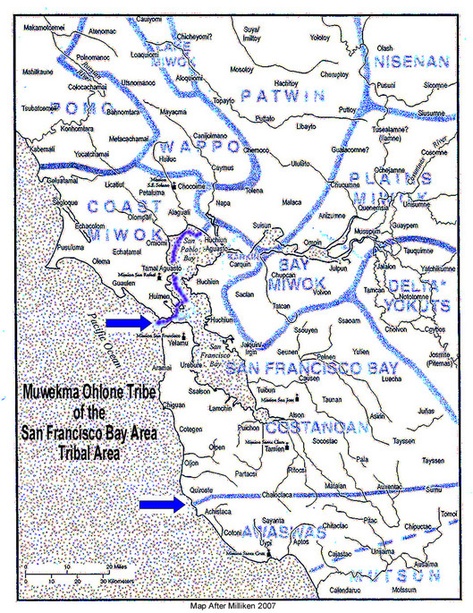