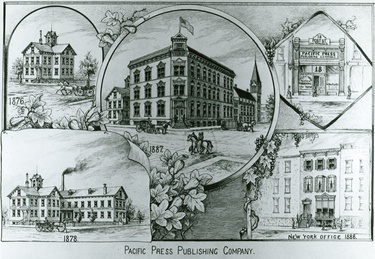 Left side and center Pacific Press in Oakland 1

Pacific Press was a printing and publishing firm, founded in 1875. It was first located at 1117 Castro Street across the street from the Pardee House. The building was badly damaged by a fire in 1977, and demolished to make way for the 980 Freeway.

Under the direction of James White, the leader of the Seventh Day Adventists, the Pacific Press building was erected in 1875 as a publishing and printing firm.

In around 1904 the city of Mountain View successfully lured the Pacific Press away from Oakland by donating 5 acres of land.  A local bank offered a $50,000 loan with "no strings attached."4

The Pacific Press left Mountain View in 1983 for Nampa, Idaho where the cost of living would be more affordable for new employees. 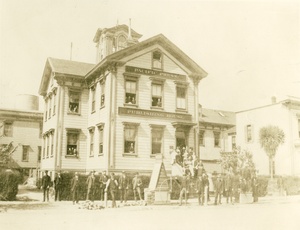 The building was a wood structure in the Italianate Victorian in the form of a Greek cross.  It was two and one-half stories with a basement and attic. The Greek cross plan was adopted as it allowed for more light in the entryway.  With a high gabled roof that was topped off with a cupola. The windows were in the paladin design.

In April of 1975, the Pacific Press Building that was built in 1876 and located at 1117 Castro Street was nominated to be Nationa Historical Landmark.2

In July of 1975, it was reported in the San Fransisco Examiner 5 that the Oakland City Council had denied landmark status for the building. The councilman feared that if it was designated it would delay the construction of the Grove -Shafter Freeway (980).  The building was in the direct path of the freeway.

In February of 1977, an early morning fire in Pacific Press building destroyed all of the building except for one outer wall.  Arson was suspected. 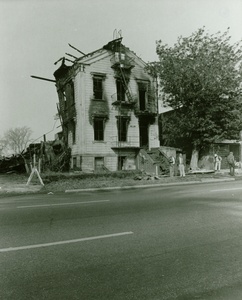 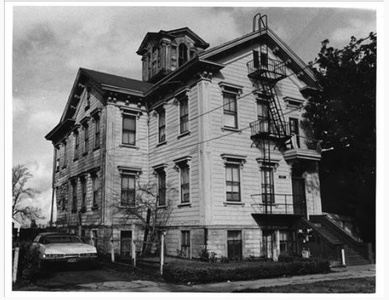 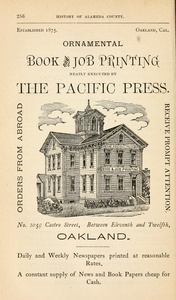